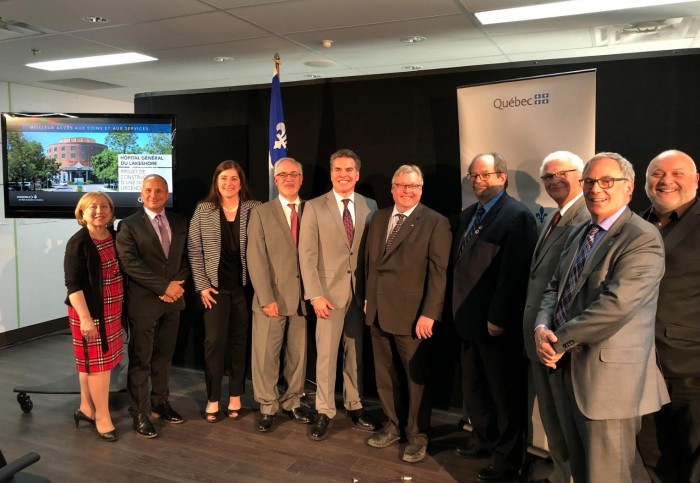 When Health Minister Gaetan Barrette served part of his residency in the ER at the Lakeshore General Hospital as a younger man, he noticed that on subsequent visits the only thing that had changed over time was new machines but the layout and size remained.

After a press conference on Monday, Barrette announced that a $90 million project to build a new ER campus for the hospital had been approved. And with $1.5 million being handed over to the West Island CIUSSS, plans for the new ER can be adopted by administration and staff as part of the ER’s first phase.

“This is day one of the new ER,” Barrette said.

Barrette explained that the project would be completed in three phases, the first being the Opportunity Dossier where the new ER plans will be constructed, followed by presenting there final plans for tender and then the construction process which Barrette described as “long because the construction of a new ER is rather complex.”

The planning phase could take between a year and two and while Barrette is hopeful to open the new campus within five years, “the construction of a new ER on average, takes about three years so the worst case scenario, it will be ready in seven years.”

“On behalf of Pointe Claire and all of the West Island municipalities, thank you for the implication as this news is encouraging for the West Island,” said Pointe Claire Mayor John Belvedere to the health minister at the press conference that was also streamed live in the hospital’s cafeteria because the hall was full. “Better health care service is something we can all look forward to.”

For Jacques-Cartier, Native Affairs Minister Geoffrey Kelley, the news of the new ER is welcome because “as a father and a community member, the Lakeshore Hospital has been important to me. Years ago, one of my daughters broke her leg playing rugby and received first class treatment, as did my parents in their later years who received cancer treatments through the ER.”

Kelley noted that the hospital, built in the 1960s, was “originally designed to help 100,000 patients but we are long past that due date and this new ER campus will be a game changer for West Island health services.”