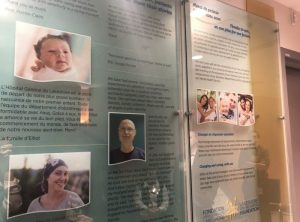 “We did it!” Said Heather Holmes.
The Director of the Lakeshore General Hospital Foundation (LGHF) was speaking
to invited guests and dignitaries about the successful capital campaign run by the
foundation that exceeded its goal and raised $8.2 million.

The three mayor’s communities were also highlighted as donors for the hospital’s
Donor Recognition Wall unveiled Monday morning in the hallway after the main entrance.

“As a team and community, we got there together,” Holmes said noting that the
decorative wall “celebrates all who helped on this big campaign and brought it to
fruition as well as the passion and dedication from all of the hospital staff.”
“The new Recognition Wall, which pays tribute to all those who, since the
inception of the LGHF, have generously and significantly contributed to improving
health care for West Islanders,” explained LGHF Communications Officer Yvonne
Falaise. “

There are many individuals, patients, businesses, municipalities, annual partners
and board members, whose involvement is recognized and highlighted, in addition
to the Foundation’s history, some accomplishments and patient testimonials,” said
Falaise.

The two year campaign had an eight million dollar objective that has already
contributed to the renovation of the ICU, purchasing new state of the art
equipment for improved cancer patient care and buying new wheelchairs for better
patient mobility.

The hospital covers a 144 square kilometre territory and “serves one of the largest
populations in the province,” said West Island CIUSSS Director and Chair Lynne
McVey. She told the assembled at Monday’s unveiling that 36,000 patients have
visited the ER since the beginning of the year and that 244 patients were currently
staying in the hospital.