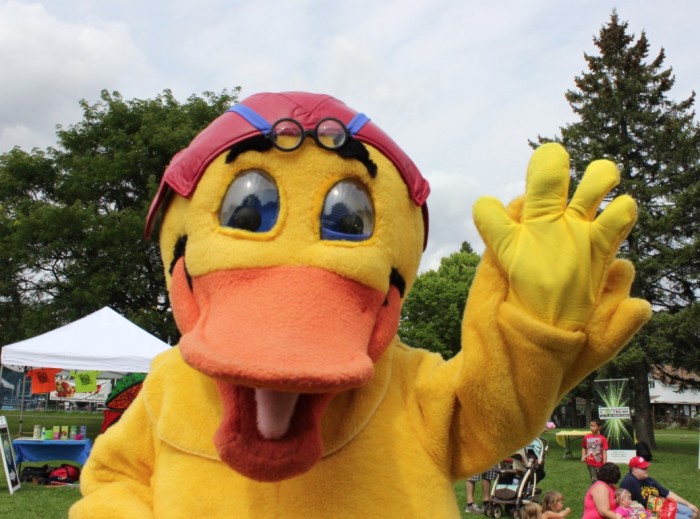 The Lakeshore General Hospital Foundation (LGHF) is preparing to throw the famous little yellow ducks to the water on the occasion of the 20th edition of the National Bank Duck Race. Presented as part of the Naturellement Sainte-Anne day, this festive and family-oriented event aims to raise funds to improve the quality of health care at the Lakeshore General Hospital. The National Bank Duck Race will be held on September 17 at 6:00 p.m. at the locks in Sainte-Anne-de-Bellevue. Tickets are on sale now at $10 on the Foundation’s website, but also at the Lakeshore General Hospital (on select days), or in several businesses in Sainte-Anne-de-Bellevue. In addition to the National Bank, the event is sponsored by: Spinelli, Cora Pointe-Claire, Parks Canada, Elran and the Montreal Airport Marriott In-Terminal Hotel.

The National Bank Duck Race is an annual event where some 5,000 ducks engage in a ruthless competition, much to the delight of both the young and not-so-young. Ticket holders are eligible to win one of seven fabulous prizes including a cruise for two to the Bahamas valued at $4,000 offered by Expedia Cruise Centres. Other prizes include: a cash amount of $2,000 offered by Plus Belle la Vie, a private event package worth $1,500 offered by L’Espace Beaconsfield, watches for him and her worth $1,300 offered by Hemsleys Jewellers, one gift basket per month for one year valued at $1,000 from Rocky Mountain Chocolate Factory, a $1,000 contribution to a Registered Education Savings Plan offered by Canadian Scholarship Trust, and a two-night getaway for two to Quebec City worth $1,000 which includes $500 cash provided by Delta Québec and Oasis Optique respectively.

About the LGHF Founded in 1964, the Foundation’s mandate is to collect the necessary funds to improve patient care at the Lakeshore General Hospital. In this way, it contributes to the purchase of state-of-the-art equipment, major structural renovations, and programs and specialized training for the professional staff – initiatives not supported by the government.