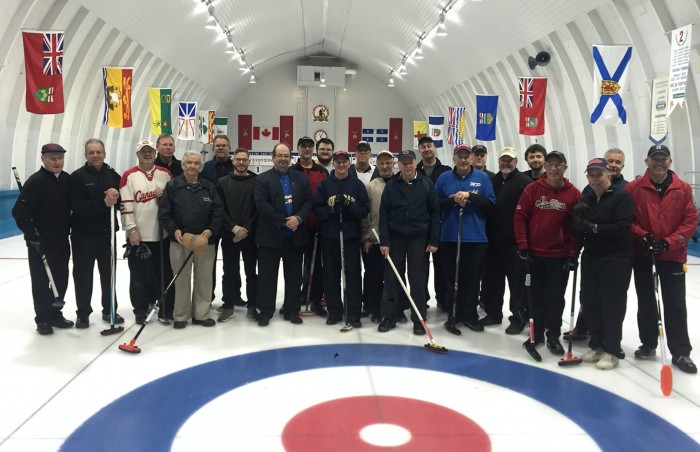 A motley crew of BMSP (Beaconsfield Men’s Slo-Pitch) curlers were clearly out of their element again this year at the “Kurling for Kids” event held last Saturday at the Pointe-Claire Curling Club.

In all, the club raised $37,000 that will be added to the funds amassed from all the other participating curling clubs throughout the province of Quebec to pay for an MR-guided laser thermal ablation for CHU Sainte-Justine.

Dr. Alexander Weil, standing left of Member of Parliament for Jacques-Cartier, Geoffrey Kelly, is the only Canadian Doctor trained to use this laser. Dr. Weil, a neurosurgeon at the CHU Sainte-Justine, recently used a neurosurgical laser to treat a child with epilepsy for the first time in Canada. Using this revolutionary new technology is a first not only in Canadian pediatrics, but is also ground-breaking in the treatment of epilepsy.

According to the CHU Sainte-Justine website, the surgery was a great success.

“We’re very proud of how the surgery went,” stated Dr. Weil, who trained in this surgical technique while completing his fellowship at the University of Miami. “Thanks to the level of precision that this technique allows, and our ability to observe the treatment in real-time via magnetic resonance imaging, this new technology lets us offer a less invasive and safer alternative, especially for those patients who cannot undergo conventional surgery or who might suffer damage to healthy areas surrounding a tumour or an epileptic lesion. Waiting times are also reduced considerably because the patient does not need to be admitted to intensive care and extended hospitalization can be avoided,” he added.

The Beaconsfield Men’s Slo-Pitch is proud to have taken part in this worthwhile event.

Pierre Demers is a long standing member of BMSP (Beaconsfield Men’s Slo-Pitch) and a City Councillor for the City of Beaconsfield. Pierre makes every effort to keep Beaconsfield residents informed on his Councillor Website www.pierredemers4beaconsfield.com