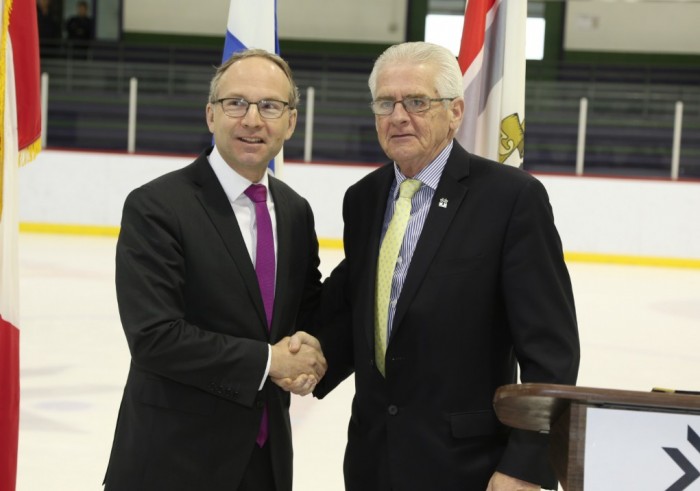 Mr. Martin Coiteux, MNA for Nelligan, Minister of Municipal Affairs and Land Occupancy, Minister of Public Security and Minister responsible for the Montreal region, visited the Kirkland Sports Complex on March 1st to announce a financial support of $964,163.64 to the Town of Kirkland as part of the Assistance Program for the Replacement or Retrofitting of Refrigeration Systems using Refrigerant Gas R-12 or R-22.

Pleased to learn of the announcement, Mayor Michel Gibson said that “This timely financial assistance will allow for a major overhaul of aging facilities – the Kirkland Arena was built in 1975 – a project that skating enthusiasts, as well as hockey and ringette players from Kirkland and from the entire West Island, have long been waiting for.”

Estimated at $4.1 million, the project will be carried out in two phases.  The first phase which is scheduled for completion from March to August 2017 will consist of building a new concrete slab, in addition to replacing the rink boards and installing new high efficiency artificial ice plant, heating and lighting systems.

Within the framework of the second phase to follow from September to November, the remaining part of the Sports Complex will be upgraded to include more environmentally friendly heating, ventilation, air conditioning and lighting systems.

“In addition to reducing green gas emissions, the renovated arena will also offer the population and local athletes access to first class sports facilities,” said Mayor Gibson, adding that “The Town of Kirkland is proud to create this sustainable legacy and foster lifelong healthy habits”.