Farah Hayat took 40 hours to deliver her first child, Noah who today is 15 months old. She thought it was premature to rush to the hospital when her contractions were five minutes apart but called St. Mary’s Hospital just to be sure. The nurse on call said it could take a few hours or another day to deliver even though the doctor performed a membrane swab at Farah’s regular checkup only days before. So Farah and her husband Mehdi Bernoussi waited a little longer.

Little Chloe had other plans on her coming out into the world party. Chloe was delivered at just over seven pounds in the front seat of the family Volkswagon Tiguan. 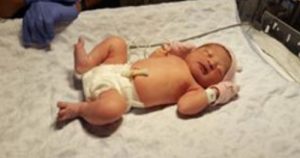 “There was no traffic, it was 11:30 p.m. at night and our GPS estimated our arrival within 25 minutes to the hospital on Côte des Neiges,” said the happy mother a week after delivering her second child. “The nurse said to come in when it was difficult to speak during a contraction. So we rested until the contractions were more intense.”

Farah’s contractions took a turn and on the drive increased to every two minutes.

“I had contractions much worse than with my first child that is when I started to worry,” Farah explained. “We turned on the street to the hospital as my water broke. I could feel the baby coming. Mehdi didn’t realize I was ready to deliver he just assumed it was strong labour. I could feel her crowning and did not know what to do. I wanted to push but tried hard not to.”

As the couple drove into the entrance to the hospital the gates were closed due to the late hour.

“Mehdi asked if I could walk,” she continued. “There was no way. I pulled down my pants, pushed for what felt like one minute and her head came out. My husband was shocked as I asked him to go and get a doctor. I pulled the baby the rest of the way out. I was relieved to hear her cry and she looked fine, so I settled down a little.”

The doctors arrived at the car to cut the umbilical cord and scooped up both baby and mother to then wheel them into the hospital.

While Chloe spent 24 hours in intensive care to monitor her breathing due to the rapid transition from fluid to air, both mother and baby are home safe and sound.

“It is all a bit of a blur,” Farah said, “I only wish the hospital had a coach in place for those that have a traumatic birth. Chloe was rushed into the world, and we both could have used some more information on the potential impact of such an event. She is doing well now. She is a good weight. We are doing great.” 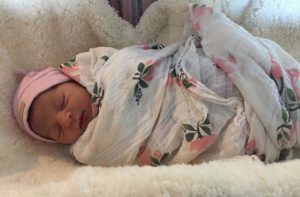