Kirkland’s Cavallaro family has raised more than $1.3 million for research to cure the once-fatal disease called Spinal Muscular Atrophy (SMA). You would expect those suffering with this disease to be happy when the recent drug Spinraza was discovered to reverse the progression of SMA. Of course, the obvious celebrations must have occurred until the dust settled and parents of young babies learned that not everyone was eligible to receive the drug.

SMA has four levels of severity. Type I is the most severe and type IV is the least severe. Kirkland resident Sammy Cavallaro has type 2. He is not eligible for the drug in Quebec. The Quebec Government opted not to cover the drug even though it was recommended for approval at the Federal Level. 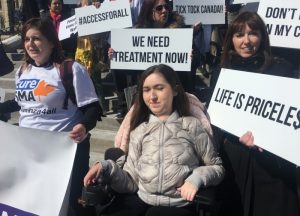 Sammy was born August 18th, 2000. A healthy baby boy until he was diagnosed with Spinal Muscular Atrophy at the age of 9 months. His parents were told that he was a Type 1 which meant that he would most likely die before his second birthday.

Sammy Cavallaro has SMA and has beaten all odds and lived past his life expectancy of 2 years old. He is currently running his own securities business, has more than 3.5 million followers on Instagram and is an honour student at John Abbott College. He is 17 years old.

Last Tuesday, Sammy, his parents Aniello and Rosa along with 40 supporters joined the Canadian Branch of CureSMA and took their plight to the steps of Canadian Parliament. There were more than 100 Canadians chanting “Spinraza for all” in hopes of being heard by those governing. Sammy’s representative made sure to carve out a few moments to greet the West Island family.

“Canada has encouraged that the provinces approve the Spinraza. How it works is the Federal government recommends which drugs make sense to cover,” said Francis Scarpaleggia, Member of Parliament for the riding of Lac-Saint-Louis where Sammy lives. “Ultimately it is up to the province to decide if they will cover it. The only province to my knowledge that has responded negatively so far is Quebec. They will not be covering it.”

While it is available in Canada young parents will get no financial assistance. The drug cost about $750,000 per year per person for the first year and $350,000 every subsequent year for life. The regular channels will not approve payment because there are not enough children with SMA in Canada to warrant concern.

Parents have a small window to administer this new drug to save the lives of their children.

SMA (spinal muscular atrophy) is a disease that robs people of physical strength by affecting the motor neuron cells in the spinal cord, taking away the ability to walk, eat, or breathe. It is the number one genetic cause of death for infants. SMA affects 1 in 6000 births and 1 in 40 people can be a carrier

SMA is caused by a mutation in the survival motor neuron gene 1 (SMN1). In a healthy person, this gene produces a protein that is critical to the function of the nerves that control our muscles. Without it, those nerve cells cannot properly function and eventually die, leading to debilitating and often fatal muscle weakness.

SMA affects approximately 1 in 6,000 babies, and about 1 in every 40 Americans is a genetic carrier. SMA can affect any race or gender.

For more information or to donate please visit www.curesma.ca 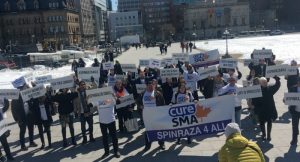