KIN Experience Musical Adventure Series is pleased to present its inaugural concert, Music of Hungary. Under Artistic Director and lyric tenor Sebastian Haboczki, gifted musicians soprano Melissa McCann, István Lakatos (violin) and Paul Digout (piano) celebrate the brilliant folk songs from Zoltán Kodály (pronounced Ko-dye), along with the music of Ferenc (Franz) Liszt and others. This outstanding musical showcase brings a retrospective of Hungarian composers to a contemporary audience for an informative and engaging concert for both Hungarians and non-Hungarians alike. One night only, Saturday, October 5, at the acoustically stunning St. James United Church. Proceeds from the evening benefit numerous Montreal youth and non-profit communities.

For Haboczki, as part of a diverse and accepting nation, it’s essential to recognize and celebrate the traditions and music of all heritages. “By taking an active role in discovering the cultures that make up our country, we build bridges for communication and understanding. The one true universal language of storytelling is music,” he said. The tenor earned a doctorate for his dissertation on Hungarian music and is eager to share these remarkable compositions which he feels should be more widely recognized in the canon of the Western classical tradition.

Zoltán Kodály was a composer, ethnomusicologist, linguist and philosopher. He travelled across Hungary collecting thousands of folk songs and composing unique arrangements. These songs express the full range of human emotions—from jealousy, to love, to revelry, and cover themes including relationships, war, drinking, and worship. They are a picture into the lives of Hungarian people at the time, “Incorporating some brief introductions, my aim is to create a journey to that part of the world,” said Haboczki. Kodály’s work preserves the traditional hundred-year-old folk melodies, enriched by the gorgeous and creative accompaniment that he has set to them.

Kodály was also passionate about the musical education of young people. He developed the Kodály Method pedagogy to teach music to youth which is practiced around the world. It popularised using solfege, a system to name pitches by giving a syllable to each note of the musical scale (do-re-mi-fa-so-la-ti-do). The Kodály Method is included in the UNESCO Intangible Cultural Heritage list.

For Julius Frohlich, Music of Hungary producer and KIN Experience founder, the company is about the people. While KIN is a co-working space/event host (KIN for kinship) he has over the years also built a community, collective and philosophy. The space brings together like-minded freelancers, entrepreneurs and innovators. Pre and post-performance receptions will be hosted by the Hungarian Ambassador to Canada, Dr. Bálint Ódor, in KIN’s beautiful, welcoming space, located near the concert venue.

Frohlich, who is also Hungarian, has his heart in the right place, “It is exciting for me, wearing my producer’s hat for the first time, to have so many people from different backgrounds working on this meaningful concert. Our objective is to bring music and pleasure to the audience while supporting several community organizations that focus on youth-in-need or promote music, arts and culture. Nothing would make me happier than to fill the St. James United Church; with people’s appreciation ringing louder than the beautiful voices of the singers and the dulcet sounds of violin and piano,” he said, adding, “I’d like those in attendance to feel enriched and entertained; giving back while enjoying a special evening of great talent.”

For highly-praised soprano Melissa McCann, this concert is notable because these selections are seldom heard and performed, “Even in conservatories and music schools, Hungarian vocal music is somewhat ignored despite the vast contributions Hungarian composers have made to the genre. Though Kodály spent the majority of his life and career researching and transcribing Hungarian folk songs, they are rarely heard in the concert hall. Even more exceptional, is to experience Hungarian opera on the stage.”

Along with McCann, Haboczki is looking forward to working with Paul Digout, a collaborative pianist and vocal coach. He is also honoured to share the stage with István Lakatos, part of a long legacy of virtuoso violinists.

Community organizations and cultural companies receiving support include: Fondation Jeunes en Tête, Opéra de Montréal, Infinithéâtre, Canadian Vocal Arts Institute (Université de Montréal) and St. James United Church. Also sponsored are Head &Hands, the Hungarian Boy and Girl Scouts and a number of Hungarian associations and churches, with tickets given out to those who otherwise would not have access to the concert.

For bios, further concert, receptions and charitable-support details, and to buy tickets: www.MusicOfHungary.com 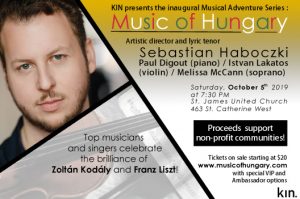 Music of Hungary Saturday, Oct. 5, one performance only

Tickets on sale now starting at $20, with VIP and Ambassador ticket options