The Hudson station at 1,420 watts covers the western off-island area, plus adjacent areas like Oka, the West Island and Ile Perrot.  The new station is the second Quebec station for Evanov Communications Inc.

Evanov’s Radio Fierté on AM 980 is the world’s only French language commercial radio service dedicated to Montreal’s LGBT community. Fierte with it’s vast signal will encompass the greater Montreal area and beyond. Programming includes a mix of today’s hits along with Disco and Techno sounds.

The two new Quebec stations bring Evanov Communications to a total of 15 stations across Canada bringing them closer a mid-size independent broadcaster.

The Ecomuseum has been reopened! Let’s check it out

Guzzo Cinémas to reopen at half capacity this Friday

REM passes over St-Charles Blvd, what about truck clearance?

What Is the Best Forex Strategy for You If You Are...

The Ecomuseum has been reopened! Let’s check it out 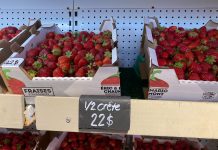 A shortage of workers and rain will hike the price of...