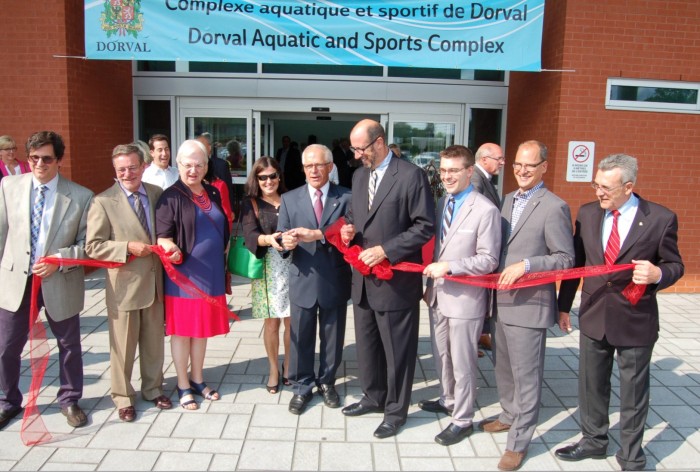 It is now “mission accomplished” for the City of Dorval, as the Dorval Aquatic and Sports Complex is ready to open its doors to the public after nearly two years of construction.

The City of Dorval’s municipal council is particularly proud of this important project, which fills the population’s pressing need for recreational installations.

“Dorval can now benefit from a first-class facility and I’m extremely happy for all Dorval residents,” said Mayor Edgar Rouleau. “It is a magnificent complex and I’m sure that it will delight citizens of all ages from Dorval and the surrounding cities.”

During the opening ceremony that took place on August 28, the Mayor thanked everyone that was involved in the project from the beginning, and especially Diane Lamarche-Venne, President of the Commission scolaire Marguerite-Bourgeoys, François Ouimet, MNA for Marquette and Vice-Chair of the National Assembly Delegation, Guy Gendron, project manager, and Carl Minville, Director of Public Works at the City of Dorval.

The Dorval Aquatic and Sports Complex will officially open its doors to the public on Monday, August 31. Dorval residents will have the pleasure of enjoying recreational swim periods and various open activities in the gymnasium, free of charge, during the first week of operations (the citizen card will be required as proof of residency). Residents of other cities will then be able to use the ultra-modern sports facility as of September 8.

“Over the past several months, the various contributors involved in this project joined forces to make this complex a reality,” explained the City’s Director of the Leisure and Culture Department, Gilles Rochette. “It’s a great example of cooperation and dialogue! We can be proud of this achievement that allows us to benefit from such a modern installation, which will contribute to the revitalization of our living environment where people of all generations can meet and fraternize. Encouraging an active lifestyle, such is our mission at the City of Dorval.”

The cost of the complex was approximately $20 millions, $5 millions of which came from a subsidy from the Government of Quebec. Located on 1295 Dawson Avenue, it is built on a lot adjacent to the École secondaire Dorval-Jean-XXIII, where students will benefit from exclusive swimming periods following a transfer of land granted by the Commission scolaire Marguerite-Bourgeoys.

“I remember the great deal of enthusiasm I had when we unveiled the project, nearly four years ago,” expressed the President of the CSMB, Diane Lamarche-Venne. “Now imagine how happy I am today for the students and citizens of Dorval who will finally benefit from this new aquatic and sports complex. This clearly illustrates the exemplary partnership that unites the Commission scolaire Marguerite-Bourgeoys and the municipality of Dorval: together for the good of our community!”

For all of the details on the Dorval Aquatic and Sports Complex (schedule, activities, programs, and courses), visit www.city.dorval.qc.ca and click on the Sports Complex button on the right-hand column.