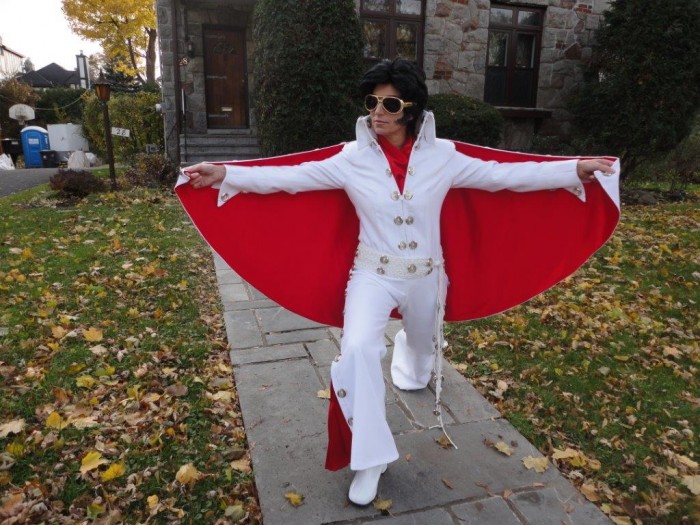 On October 31st, 2015, Halloween to be exact, I spent the day and night in a gorgeous custom-made costume. I dressed as Elvis Aaron Presley. The costume was the perfect replica of the 1970 White Concho Suit.  Elvis wore this jumpsuit during some of his International Hotel Vegas shows.  He wore this jumpsuit and many others during his years of live performances.  Some were so ornate and heavy that he could barely move in them (Aloha Live Show – Hawaii,1973).

There were only a few differences between my jumpsuit and his. The buttons on my suit were plastic and his were metal. The weight of my suit was somewhat lighter than his. Elvis’ suit was much tighter to his body than mine. I also added the cape and some red satin lining for image effect. It was the perfect Elvis jumpsuit.

At the end of the night, my body was exhausted from wearing such a heavy suit. I didn’t dance and sing under hot lights in it. I didn’t sweat like crazy in it. I didn’t perform in front of 30,000+ screaming fans in it. I just wore it and walked around smiling all night.

The next day I needed Advil every four hours to deal with my shoulder and back pains. My knees were also aching from the platform boots. Ok, I get the fact that I was 53 and Elvis was between 35 to 42 years old when he wore this kind of jumpsuit. The toll on my body was definitely age relevant. Again, I will mention the fact that I didn’t sing and dance and perform in this suit. I just wore it.

This made me realize how exhausted Elvis must have been performing night after night, wearing these heavy suits, and entertaining the audience to the best of his ability. It takes a toll on the body and the mind. Also, I didn’t have to deal with the pressure of the promoters, investors, managers, and all the other salaries that were depending on his performances.  He was just an entertainer, a man, a human. A person like you and I. Yet, the demands on him to give to the public and his people were insane.

If all I needed was a day taking Advil to ease my pain, I can just imagine the medication he needed to manage his pain. It’s no wonder he didn’t live a long life.

Unfortunately today, I can say the same for beloved Prince…

I guess the same could be said about other young sought-after performers such as Marilyn Monroe, Michael Jackson, and now Prince. They died too young and had so much more do to. It was almost impossible for them to live their lives as normal people – which they were. Regular people like you and I, but with extraordinary talent and gifts.

I realize that once a person becomes a public figure, their lives are seriously public. Some public figures want that in order to increase their revenue – as in the Kardashian family.   When is a public figure allowed to live a private and regular life? How many more athletes and celebrities will need to die young for the public to get over their obsession with the legends?

Maybe their premature deaths were at the hands of their handlers? You know the people who were supposed to help care for these famous people. Perhaps their handlers kept them performing so as to keep making money for themselves? Maybe we don’t know enough about drug abuse, alcohol, and insomnia? Maybe, as adoring fans, we need to respect the celebrity as simply a person like us.  There are so many questions that need to be answered and won’t be, but need to be especially now.

Maybe it takes a night of wearing what they wore to realize the demands and pain on their bodies and minds. Also, maybe we need to simply appreciate their craft and respect their private lives.  You can say that I walked for 9+ hours in Elvis’ jumpsuit to realize his body pain. All I needed was Advil. I can understand why he needed so much more. Especially since he wore these jumpsuits and he performed night after night, after night, after night in them.

When someone shouted to me, “Hey Elvis, I thought you were dead from an overdose!” I cringed and shouted back, “Elvis Lives!”  I believe the truth of his death or Michael Jackson or Prince might be the simple fact that as people, just like you and I, they weren’t able to keep up with the demands of their public image. They couldn’t sleep soundly. They couldn’t be who they are. They lived on the stage 24/7. They had pain, just like we have pain. It was just too much to simply… be.

When tragedy strikes, like the untimely death of Prince, it dawns on the population that these people are just like us.  They are super talented people doing an extraordinary job with their talent.  At the end of the day, they are tired just like everyone else.  They are people, they are human. They seek love and a life.

Instead of being “hounded like a dog”, they should be respected from a distance. Not through a super zoomed, judgmental lens.

Adore them from afar and let them be. Now they rest, all but too soon.