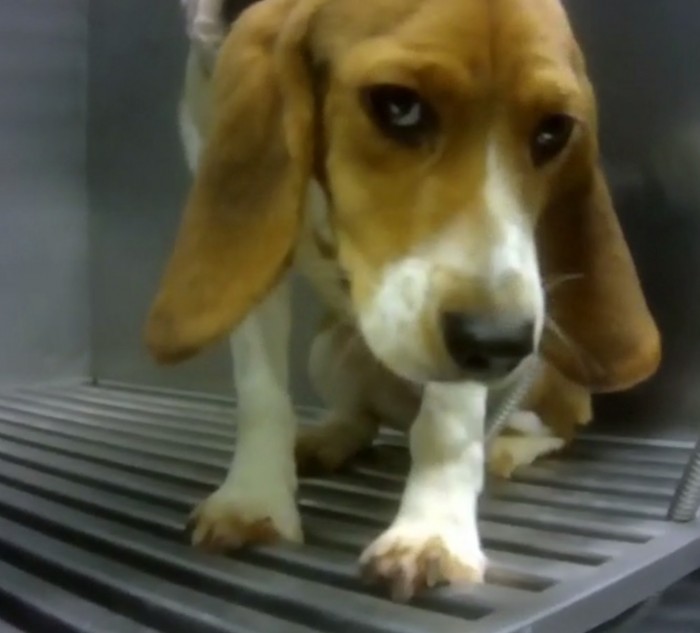 The following content and video are not easy to watch.  Last Chance for Animals (LCA) spokesperson Sayara Thurston confirmed that much of what we see here is not illegal though some of it is during an interview with West Island Blog.

An investigation released by Last Chance for Animals (LCA) reveals the suffering of lab animals at one of Canada’s largest Contract Research Organizations (CRO).  For over four months in 2016, an LCA investigator worked at International Toxicology Research Canada (ITR), located in Baie d’Urfe, Quebec, a suburb of Montreal. The investigator filmed numerous violations of the Animal Welfare and Safety Act, the Regulation Respecting the Safety and Welfare of Cats and Dogs, the Act respecting the Conservation and Development of Wildlife and the Regulations Respecting Wildlife in Captivity.

LCA’s investigation into the suffering of pigs, monkeys, and beagles at ITR; a facility that is hired by companies to test the toxicity of their products, highlights the plight of monkey #2502 whom the investigator named “Grace.”  Grace suffers greatly from the stress of confinement and her constant exposure to painful study procedures such as “gavage” where a tube is forced down her throat and chemicals pumped into her stomach.  She spent most of her time while being observed exhibiting serious stereotypic behaviour and has large patches of hair missing from her body which ITR staff attributes to stress.  International experts who reviewed the video evidence agreed.

“Large amounts of patchy hair loss, in the absence of a skin disease, for a monkey living alone in a cage, this would be the result of self-mutilation by the monkey, due to a behavior pathology associated with the stress of a captive environment,” said Dr. Jessica Ganas, primate conservationist with over twenty years of experience working with primates both in labs and the wild who received her PhD from the Max Planck Institute for Evolutionary Anthropology.

Margaret Whittaker Behavioural Advisor to the Old World Monkey Advisory Group of the American Zoological Association with 30 years of experience caring for captive primates states that “after viewing this video, it is my professional assessment that the monkey wearing the red collar is of extreme concern; her situation must be addressed to alleviate her suffering. I also believe that many of the other monkeys are at risk of developing behavioural pathologies and suffering from the techniques used at this facility.”

“Last Chance for Animals urge MAPAQ to act swiftly to enforce egregious violations of law at ITR Canada.” states Adam Wilson, Director of Investigations for LCA. “Striking puppies, slamming monkeys, and burning the backs of pigs with caustic substances is illegal even when done in the name of science.”

In recent decades, scientific advancements have made tests involving animals obsolete thanks to the development of cheaper, more effective methods. Scientific innovation continues to render the use of animals in laboratory testing, and medical trials unnecessary.  As LCA’s investigation has revealed, animals used in medical tests are not only subject to the pain, neglect, and deprivation caused by medical procedures, but are often also the victims of unrelated abuse and mistreatment.

About Last Chance for Animals (LCA): LCA is a non-profit organization dedicated to eliminating animal exploitation through education, investigations, legislation, and public awareness campaigns. Since its formation in 1984, LCA has succeeded as one of the nation’s pioneer animal advocacy organizations. Working internationally, LCA’s Sam Simon Special Investigations Unit documents abuse in research labs, puppy mills, factory farms, and the entertainment industry, and works with prosecutors to enforce animal cruelty laws. LCA’s educational and public outreach programs have empowered the public to make positive changes for the animals in their own communities.  www.lcanimal.org