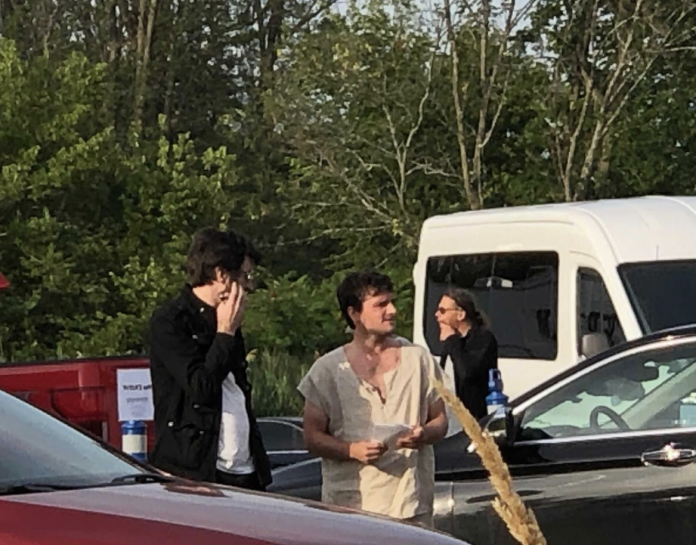 American actor and producer, Josh Hutcherson formerly of The Hunger Games, was filming the TV Series Future Man last week in Sainte Anne De Bellevue.  He was not alone.   Kevin Hart,  American stand-up comedian, actor, and producer has been filming in Pointe-Claire this summer.
This is not the first summer the West Island has been star struck.  In 2016, Bruce Willis filmed at Cugini’s in Beaconsfield.

Josh plays  Josh Futturman, a research facility janitor and the first person to complete the video game Biotic Wars. Executive producer Seth Rogen and Evan Goldberg were also said to be on set in Montreal. 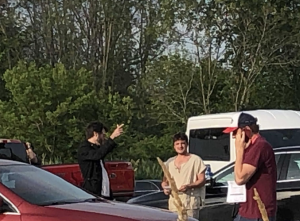 “I filmed here 13 years ago,” said Hutcherson during an impromptu interview with West Island Blog.  “I was lucky both times to be filming during the summer months.  I am from California, so these heatwaves are not a problem for me.”
Actors were in full costume, so Josh was not able to take a close up picture; however, we managed to capture him from afar.
The crew was set up at the entrance of the Morgan Arboretum where several costume and makeup trailers were set up for cast and crew.  Filming took place in the wooded area of the Arboretum for several days.
On January 8, 2018, the series was renewed for a second season consisting of thirteen episodes that pr 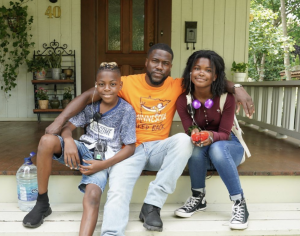 emiered on January 11, 2019. In April 2019, Hulu renewed the series for a third and final season.
Kevin Hart and his children were spotted at the Beaconsfield Golf Club in July as well.  Some eager campers made signs of welcome for the Harts which got the actor’s attention.  Hart challenged his children to find a way to provide ice cream for all the campers.   They accepted the challenge and delivered Wild Willies to all in attendance that day.

A mysterious gentleman was spotted in the Plateau, by local photographer, Dan Bouguer, filming a Canadian Detective.  West Island Blog tried to secure the man’s name with the help of social media but to no avail.   The man remains a mystery. Let us know if you know his name!

For more fun filled activity around the West Island this August check out Rhonda’s Best of the West.