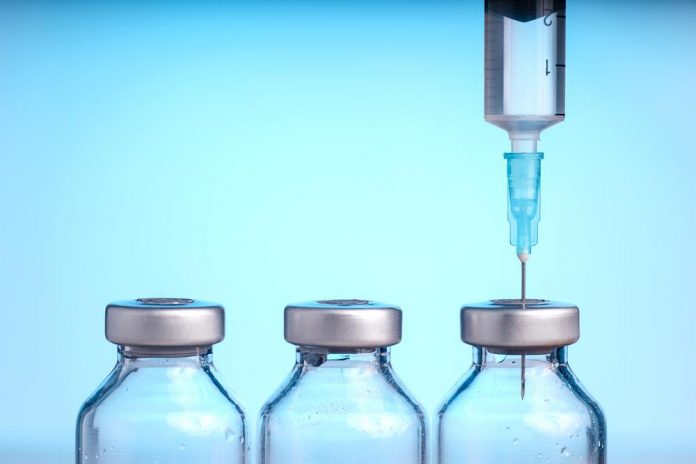 With a fourth wave expected this fall, Sheena Friesen and others are focused on fighting regional health orders designed to reduce spread of the COVID-19 and prevent lockdowns in Manitoba.

She and around 300 others gathered on the lawn outside the Hannover School Division offices in Steinbach on Monday to protest mask mandates and compulsory vaccination rules for school staff when students resume classes next week.

“We need people fighting for freedom,” said Friesen, one of the organizers and a mother 3 kids in the division. “It’s not about whether you like wearing a mask, we don’t want that for our kids, but at this point we just want the freedom to choose.”

The protest comes after the region announced this past week that teachers and school staff will have to be vaccinated by the end of October, and masks will be a must throughout the education system, including on buses.

That move followed calls on Manitoba from some teachers, parents and school divisions to impose those preventive measures this fall, when an anticipated 4th wave of COVID-19 infections is expected to be driven by the highly contagious delta variant.

Friesen sees mandates as an infringement on her right to choose. Her faith factors into her outlook as well.

“It’s my body and my choice, and that’s something we hold dear here in Canada,” Friesen said.

“I am a Christian, I am a God-fearing woman, and these are our temples and we have to treat them well. And that decision, how you treat your body well, is up to you.”

She refused to comment on Manitoba’s role in creating the latest health orders.

Another speaker present at the protest spoke freely on the issue, reading a section of a recent defiant letter drafted by Progressive Conservative MLA Josh Guenter to Premier Brian Pallister.

“This is no longer about a virus or a vaccine, this is now about government overreach and the setting of dangerous precedents that will be hard for my children to correct,” the man said via a microphone held up by Friesen.

Regional health orders motivated the crowd to gather initially, but it additionally drew federal candidates running for the People’s Party of Canada.

Fighting so-called vaccine passports is a party platform point heading into the next election.

“If you look at our prime minister’s comments early in the pandemic, they asked about vaccine mandates and he’s like, ‘Ah, in a place like Canada? Of course not.’ Now, here we are,” said Gautron. He ran and lost in the Winnipeg riding of Elmwood-Transcona in 2019.

Other jurisdictions in the United States are already seeing hospital numbers rise, in some cases higher than any previous wave, with the unvaccinated accounting for the majority of severe cases and deaths.

Manitoba has some of the highest vaccination rates in Canada, but experts have warned for months of possible spikes in pockets of the region where rates remain comparatively low.

That includes Hanover – at just over 46% as of Monday, the health district has the 3rd lowest rate of fully inoculated residents in Manitoba.

The crowd at the Steinbach protest was urged to pull their kids from in-person learning this fall should the Hanover School Division decline to reject vaccination and mask mandates.

“Sometimes we have to go to drastic measures in order to be heard, which is not where we want to be,” said Friesen, who described herself as an early childhood educator who has worked with children for eighteen years.

“We’re not here to make people feel bad, this is not about camps, which side you’re on. It’s about freedom. That’s what we’re here for, that’s what this country was founded on, godly principles of freedom.”

The Hanover School Division board of trustees refused an interview request from the media.

In a statement, the school board acknowledged parents and caregivers in the community have different views on COVID preventive measures in schools.

“We understand and respect the importance of community voice and urge for compassion and respectful dialogue when engaged in these conversations,” board chair Ron Falk said in a statement.

As of Friday, a range of services will just be available to those who are vaccinated, including indoor and outdoor restaurant dining, movie theatres and indoor theatres, nightclubs, bingo halls, casinos, and more. Ticketed sporting events and concerts will additionally be just available to those with an inoculation card or proof of vaccination.