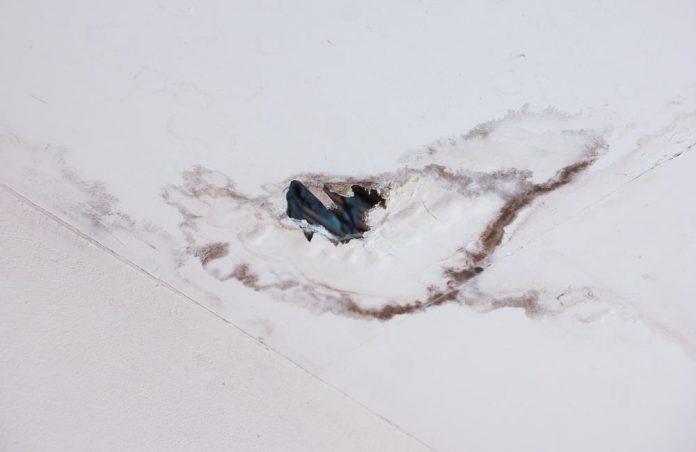 The Splash Centre in Harbour Grace, which offers hundreds of young persons everything from meals to prom dresses, recreation, and mental health support, is in dire need of help to keep its programming going.

Since 2014, the center, a part of the region’s community youth network, has called the former Harbour Grace Primary School home.

However, the building’s roof has been leaking.

Executive director Maggie Snow says the leaks were contained to the gym when they initially moved in, though they have since increased, causing damage throughout the building.

“Sometimes we say that our programming is weather-dependent, which is ridiculous when we’re talking about an inside facility,” Snow said.

“But on rainy days, or depending on which way the wind blows … sometimes we have to close down the gym for programming,” she said.

Snow said employees move activities around the building for safety to prevent falls on the slick floors. Containing the water is a tough calling in itself, she says.

“We really want to maintain the level of programs and services we have, and in order to do that we really do need to save our facility,” Snow said during an interview Sunday.

Snow said her team got a quote to fix the roof last spring. Contractors estimated a whopping $300,000 repair job.

However, the Splash Centre does not own the building that it and other community groups call home, but rather, but rather it is owned by the Newfoundland and Labrador English School District.

In a statement, the district said it has not required the building for some years and “cannot prioritize repairs on a building not required for K-12 education.” The board additionally says it does not receive rent, nor contributions for municipal fees, utilities and maintenance, from groups staying in the building.

“We cannot continue this arrangement any longer, given the building is surplus to our needs,” reads the statement.

The district has offered the structure to the Town of Harbour Grace.

Mayor Don Coombs hopes the structure will be a regional purchase. He has been talking with the joint councils of Conception Bay North, which constitutes communities from Brigus to Victoria, regarding taking on the building as an “open facility”, he stated, for the youth in nearby communities.

Coombs says discussions with the joint councils began last week. He went on to say that they need to consider buying price along with operating costs of the property, which Coombs estimates will come to around $60,000 annually.

Coombs said he is thus far sensing an appetite to save the property.

“We need everybody involved because it serves the region,” said Coombs.

Cupids town councilor Rod Delaney, who is on the executive of the area’s joint council, concurs with Coombs about the center’s scope.

“Their services are so far-reaching that it was overwhelming to me to find out exactly all the programming that they provide in the area — the best-kept secret in Conception Bay North, in my mind,” he said.

He believes interested parties have a short period to get the repairs done and produce a sustainable, longer-term plan for the center.

In the meantime, Snow said she understands the school district’s position and is lobbying the province’s and the federal governments for help.

The school district said if the town accepts the transfer of ownership, it might open doors for provincial grants.

Whereas the towns discuss the offer, the school district has that in case the group of councils refuses, it will list the property for sale.