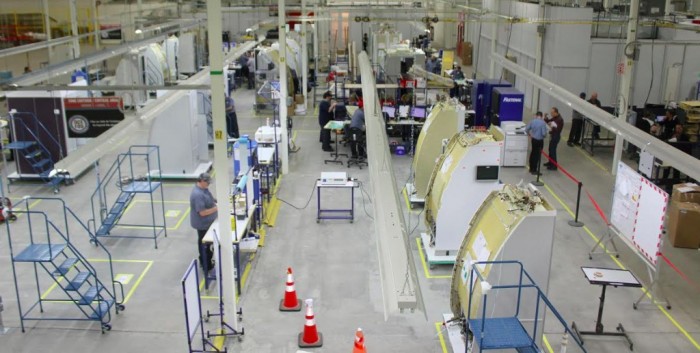 “The establishment of a major player from the aerospace industry in Sainte-Anne-de-Bellevue is a great example of an economic renewal trend that is taking place in our city. We positively welcome its relocation which will profoundly contribute to the effervescent development of this leading industrial sector. Within the framework of the proposed Programme Particulier d’Urbanisme (PPU) for the city’s North sector, and with the upcoming Metropolitan Electric Network (Réseau Électrique Métropolitain – REM) along with the creation of a new industrial park dedicated to the green economy’s new technologies, we are truly witnessing the birth of a renewed synergy. Over the next few years, this impulse will guide Sainte-Anne-de-Bellevue’s economic expansion”, said Paola Hawa, the city Mayor.

The relocation of Zodiac Aerospace’s industrial operations is the result of substantial recent growth, in part due to obtaining the contract to manufacture Airbus 350’s new program components. The relocation required a significant investment totalling $5 million, primarily allocated to developing and improving the new premises.

When asked about the choice of Sainte-Anne-de-Bellevue’s industrial park, Zodiac Aerospace Operations Vice-President Michel Bussey said: “Sainte-Anne-de-Bellevue’s industrial park was a natural choice for our operations plant. In addition to finding the right place for our needs, we were especially sensitive to our employees’ quality of life. The natural “outdoors” feeling of the city, combined to the proximity of the bicycle path and the future arrival of the REM motivated and confirmed our decision”.

Founded in 1896 and based in France, Zodiac Aerospace employs 35,000 people throughout the world. The company has chosen to relocate part of its operations into the former Tenaquip Ltd. building, on the city’s Industrial Boulevard. The building belongs to Broccolini and has remained unoccupied since 2015.