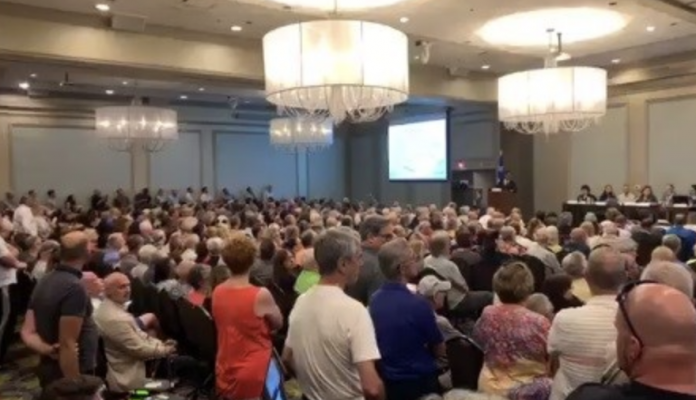 While citizens of the West Island of Montreal have been experiencing the stress of flooding for months, a public meeting put on by the Ministry of Municipal Affairs and Housing (MAMH) about the long-awaited proposed flood zone map was presented in French only.

“When asked, the government responded by saying that Bill 101 was the reason they had French only content,” explained Daniel Elie Khoury, Head Volunteer in Pierrefonds during the 2019 flood crisis.  “Let’s be clear, Bill 101 requires them to have French content, however nothing in this bill restricts them from having English content as well. It’s a question of respect for the English speaking flood victims that lost their homes.”

Several hundred citizens attended the public meeting on the adjustment of the mapping of flood zones last Thursday in Pointe-Claire. Although the Borough of Pierrefonds-Roxboro and the cities of Dorval and Pointe-Claire have a bilingual status, the organizers made the presentation in French only.

“It’s not a lack of respect, on the contrary, at the level of the English language, I just wanted to tell you that there is the law 101 in Quebec […]”, answered one of the organizers to Mayor Beis. The standing-room-only crowd booed in response. The MAHM official mentioned that copies of the presentation were available in English.

“I saw at least 20 people get up and leave the meeting after this response,” says Nader Barsoum, a resident of Pointe-Claire.

Public meetings were held by the MAHM simultaneously in several regions of Quebec. The Pointe-Claire meeting was presented in French only with animation in both languages and hard copies of the English PowerPoint presentation were given to participants who requested it.