Hundreds of March For Our Lives rallies took place across the country and around the world Saturday, as people called for action on gun violence. According to Gun Control Now, Americans own 48% of the estimated 650m civilian-owned guns worldwide. Former Montrealer living in Sandy Hook Connecticut, Christine Nault Crudo joined the March for Gun Control, as a mom, as a Sandy Hook community member and as an employee of Sandy Hook Promise.

“I marched for our future,” said Crudo who moved to Sandy Hook more than 16 years ago.

Crudo was one of the 800,000 people who gathered around Washington’s Capital Building to listen to speeches from activists and survivors of shootings, including survivors of the Parkland, Fla. shooting David Hogg and Emma González.

The crowd was moved by the surprise guest, Yolanda Renee King, the granddaughter of Dr. Martin Luther King Jr. who also has a dream.

“My grandfather had a dream that his four little children will not be judged by the color of their skin, but by the content of their character,” said 9-year-old King, “I have a dream that enough is enough,” King added. “And that this should be a gun-free world, period.”

According to Crudo, the crowd was very patient with emotional speakers who often were brought to tears mid-sentence.  The crowd did not have cel service during the march.

“When the young speakers were talking you could hear a pin drop,” Crudo said. “But if they faltered or got choked up from emotion, the crowd would shout ‘you can do this’ or cheered them on. It was very moving.”

Naomi Wadler, 11 years old, shared a quote from Pulitzer Prize-winning writer Toni Morrison: “If there is a book that you want to read but it hasn’t been written yet, you must be the one to write it.”

“They are writing it alright,” Crudo said of the crowd dominated by youth in Washington.

According to Crudo, there were eight buses from Newtown Connecticut, the home of Sandy Hook Elementary School, loaded with peaceful marchers at the Washington march. 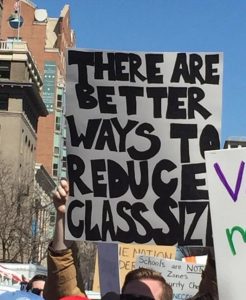 “The 20 first graders in Sandy Hook did not have a voice,” Crudo stated. “The kids from Parkland will be voting in the next election. I think the kids who spoke at the March of Lives will be the change. The signs that these kids made were incredible.”

Crudo works for Sandy Hook Promise, an organization that aims to prevent gun-related deaths due to crime, suicide and accidental discharge so that no other parent experiences the senseless, horrific loss of their child. The organization is led by several family members whose loved ones were killed at Sandy Hook Elementary School. Their goal is to train educators, parents, community leaders and students on how to deliver gun violence prevention programs that help detect signs of tragic events before they happen.

Their mission has to date trained more than 3,5000,000 people in their programs and practices.

Sandy Hook Promise offers a free guide on how to know the signs of gun violence and prevent tragedies. The guide can be found online at www.sandyhookpromise.org 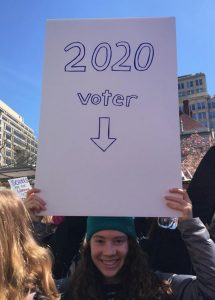