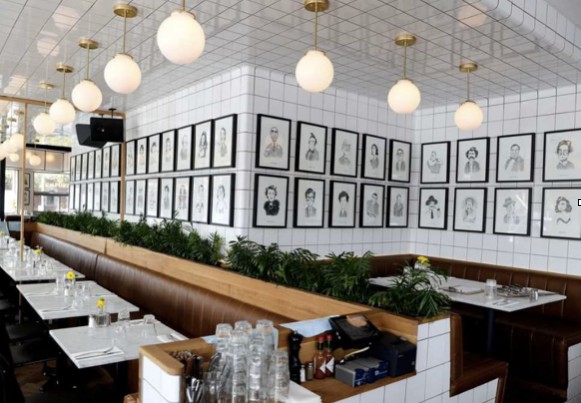 A few summers ago, I travelled to Paris. Though the experience and the culture were beautiful one thing stood out the most was…. the “croque madame”. If your unfamiliar with French cuisine, the croque madame is a baked or fried ham and cheese sandwich topped with a runny egg that is typical of French bars and cafes to serve as a quick snack. It is so fa 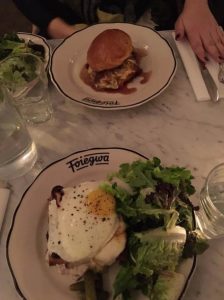 r off from the typical ham and cheese sandwich you may be envisioning, it has melty cheese, a crispy outer layer and the richness of an egg yolk all served on the most prefect bread…it is basically French comfort food. The point of all this, is since my trip I had only the fond memory of this “snack” and had yet to find a croque madame to suit my cravings in Montreal.

This was until I stumbled across Foiegwa. Foiegwa is in trendy St-Henri on Notre Dame street (which has easily become the restaurant mecca of Montreal). Foiegwa is best described as a neighbourhood French diner. Though they serve French cuisine, the beautiful sketches of famous Montrealers that adorn the walls of this small diner remind you that you are in fact in Montreal! The menu has a vast cocktail list, delicious diner-style milkshakes (which aren’t so French), and some dishes that you would expect to see on a “typical” French menu as such snails, French onion soup, and my favourite…. croque madame.

As you may have guessed already, I ordered the croque madame. Did it live up to all my expectations and the memories I had of the ones I ate in Paris? ABSOLUTELY. It was outstanding, the triad of ham, melty cheese and the rich yolk was heavenly and really lived up and even surpassed all my expectations. Another star of the evening, and interesting menu item was the cheeseburger. This is far from your typical burger, topped with caramelized onions, cheese and foie gras, served in a delicious au-jus sauce. Though I managed to steal a bite it was decadent and different from anything I’ve ever had before and next on my list to have at Foiegwa. These two dishes were served with either salad or fries. I opted for the salad and shared a side dish of fries with my friend, might I mention that they were some of the crispiest fries? The kind that taste best dipped in mayo (my favourite).

The atmosphere is unique, the crowd young and trendy, and the dishes were outstanding which has become the norm of St- Henri restaurants. If you’re looking to try Foiegwa, I would recommend it a hundred times over. Make sure to call for a reservation…due to its small size and few tables the place fills up quick!