June 18, was the first ever half marathon in Pointe Claire benefitting the Alzheimer’s Society of Montreal.

According to Pointe Claire Mayor Morris Trudeau, who was on site giving out awards and cheering for the runners, the event was put together in record time.

“We expected maybe a thousand runners in the first year,” Trudeau explained, “in the end we had more than 2,200 participants.  We are very happy with how it went and we hope to do this again for years to come.”

The courses varied in length from 1k all the way up to the full half-marathon length, 21k, making it ideal for the whole family to participate. Even children are encouraged to take part in the 1k or 2k races. 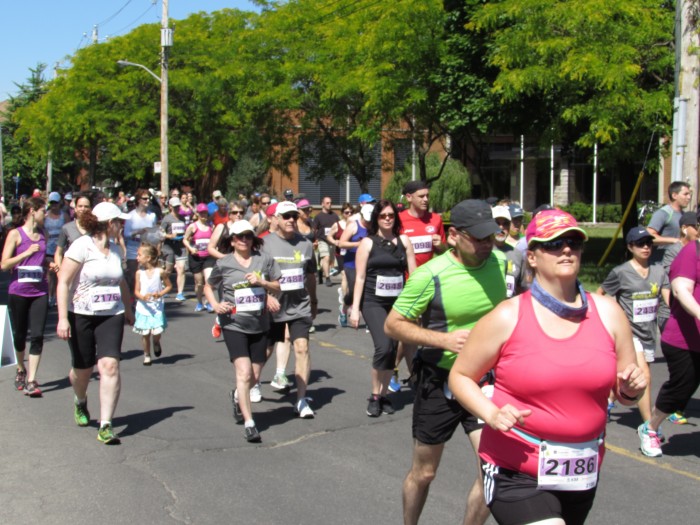 Each race started in Pointe Claire Village on Du Bord-du-Lac on Lakeshore Road. The course took runners along streets and bike paths, through tunnels and parks, and along the shores of Lake Saint-Louis. Each run ended in Pointe-Claire Village where people could discover the shops, have a cup of coffee, relax near the water, enjoy a picnic in the park, or watch the world go by on a terrace.

There were plenty of sponsors on site such as IGA who provided healthy snacks of fruits and juice boxes.  Right next door, Desjardins took the edge off with a massage tent for the athletes. For a small hourly rate, Les Super Actif daycare opened up a satellite for those in need of childcare during the event.   Lululemon Athletica in Fairview shopping centre took care of the registration and gave out the numbers and race kits to participants.  They sold their last number on Friday, June 17.

Gérald Hubert, Executive Director of the Alzheimer Society of Montreal, was also very pleased with the events leading up to the marathon.

“We were apprehensive in our first meeting with the City of Pointe Claire,” he explained, “we had never met with them before and did not know what to expect. We were pleasantly surprised to be welcomed with open arms.  The marathon was put on in record time and it was a great success.”