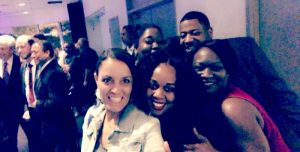 This year, the West Island Blues Festival has raised more than $150,000 for local community groups. This year the two-part event will distribute funds to the Alzheimer Group Inc., WIBCA, Literacy Without Limits, AJOI and the West Island Women’s Shelter. The VIP event held last Thursday, May 24, at the Pierrefonds cultural center was well supported by fans of the festival. Local politicians and community members came out in full force to enjoy the music of the headliners Big J and the Rippers but not before witnessing the opening act, the Record Breakers who recently opened for Bon Jovi.  VIP’s present included MP’s Frank Baylis and Francis Scarpaleggia, Quebec Ministers Carlos Leitão and Martin Coiteux along with Mayors from Pierrefonds-Roxboro, Dollard Des Ormeaux and Pointe Claire and many local councillors.

“The tradition is growing bigger every year,” said MP Francis Scarpaleggia. “Let’s make DDO and Pierrefonds the muscle shows of Canada with this beautiful day of music that we can all share.”

The festival has been connecting artists with West Island music lovers for 15 years.

“When I started this event years ago I asked the then sitting mayor of Pierrefonds Roxboro would you like to join us as a partner, she said yes,” said City Councillor in Dollard-des-Ormeaux Errol Johnson stated. “The new Mayor Jim Beis continued the work, and then Dollard joined in with the offering of the location. We exist for the benefit of local community groups.”

The collaboration and support of Pierrefonds-Roxboro and Dollard Des Ormeaux was emphasized by the many elected officials from across the West Island. Notably the entire elected Pointe Claire Council we danced the night away.

Both Pierrefonds-Roxboro Mayor Beis and DDO Mayor Bottausci reiterated that the most important thing about this event is the fact that these community groups are the foundation of the West Island will receive much-needed support.

The outdoor festival will take place on Saturday, June 16th from 2:30 p.m. to 11 p.m. The participants of the free event will have the pleasure of seeing the following bands perform: Brothers in Blues, Miche Love & Louis Janelle Band, Riot & The Blues Devils with guest Dwayne Dixon, Brian Greenway’s Blues Bus, and 5 Avenues.

For tickets and more information: www.westislandbluesfestival.com