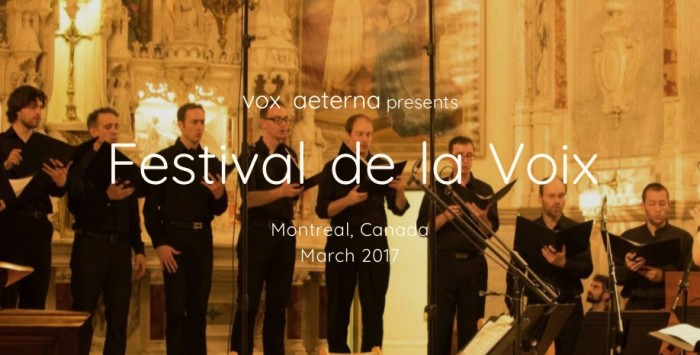 This year the theme is Heritage and Family in honour of and to mark the celebrations of the 150th birthday of Canada, the 375th birthday of Montreal and the 125th birthday of Dorval. Festival de la Voix Artistic Director, Kerry-Anne Kutz, welcomes people from all over the city to come together once again to explore, enjoy and celebrate the beauty, versatility and power of the human voice.

The music in the Gala concert, Songs of our Roots and Family Ties (Fri. Mar. 24), reflects some of the many cultures which unite to create the Montreal mosaic. Expect a musical tapestry of First Nations, Québecois, Black, Irish, Italian, German, French, Jewish and Muslim traditions.  Kutz is delighted with the talent on hand, “We are thrilled to present Quebec singer Judi Richards, her daughters Karine and Sarah-Émilie, and Monique Fauteux of Harmonium. We’re also looking forward to experiencing Inuit throat-singer Evie Mark. As a special tribute to the momentous 2017 city and country anniversaries, composer Shamala Jayasekera and Luc Pharand have created words and music for a  piece which will be performed by the Choeur Vox Aeterna to be premiered during the Gala concert.”

Juno Award-winning, singer/songwriter Connie Kaldor and her family will present the opening concert at Christ Church Beaurepaire. For the first time, Festival de la Voix is ‘going to school’ with the RCAF 438 Tactical Helicopter Squadron Band who will play for music students at Lindsay Place, Beaconsfield and John Rennie High Schools.

The Festival honours senior citizens with Golden Voices: In the Mood!, a Saturday matinee concert of songs with great lyrics and memorable melodies.  The afternoon stars Barbershop at its best, a fiddler, and the Generations Big Band conducted by George Doxas. Saturday night’s Rock ‘n Blues, headlining the Canadian rock group Made Them Lions (MTL), will have people dancing the night away. Kutz is very excited to launch Choralissimo! “This newest addition to Festival de la Voix, featuring four diverse and remarkable choirs from Montreal and Saskatchewan, will sing from Renaissance to Retro.” This perfect pre-dinner concert (Sun. Mar. 26 at 5pm) also features CBC Competition winners, the Sainte-Anne Singers.

Four wide ranging and enlightening workshops will make singing accessible to everyone. Popular choices are: The Singer as Storyteller: Words and Music with actor/singer/director Joan McBride (a third date has been added due to high demand); Songwriting Workshop with singer/songwriter Rob Lutes; the Alexander Technique with specialist  Suzanne Jacob; and Marcia Bailey will teach how to swing and sing Gospel.

For Kutz, music connects people to each another and builds the bonds of community, “May the beauty of each voice and ensemble inspire and warm you. Let us lift our voices together.”

One of the few festivals taking the risk of showcasing Canadian music, Festival de la Voix,  now in its 4th year in three West Island communities (Pointe-Claire, Dorval, Beaconsfield), continues to offer concerts for all ages and tastes, as well as workshops and master classes. This year’s theme is Heritage and Family, in honour of Canada’s, Montreal’s and Dorval’s birthdays. Ms Kutz, welcomes people from all over the island to come together to explore, enjoy and celebrate the beauty, versatility and power of the human voice.