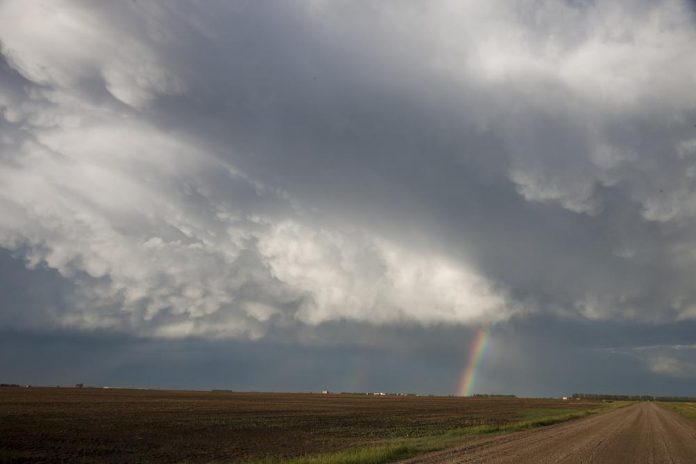 Eight people suffered injuries, four severely, when a tornado struck through a neighborhood in Barrie, Ontario on Thursday afternoon, leaving a trail of destruction in its wake.

“Everybody is accounted for, but it is early yet,” he said.

Fire officials said personnel were checking “under every bed and behind every door” to ensure no person was trapped in the rubble.

Crews said about 20 homes were destructed, and “about three or four” would have to be reconstructed.

Early Thursday afternoon, an Environment Canada tornado warning blasted over the airwaves and to mobile phones as the skies darkened over the south end of the city and heavy rainfall.

A local resident Sheldon Murphy said they were in the kitchen when the alarms sounded.

“We saw stuff starting to fly around in the air, spinning. That’s when we got everyone down in the basement. Then five minutes later, it started to clear up.”

Environment Canada meteorologist Steven Flisfeder confirmed that it was a tornado that hit the town later in the day.

“At this time, based on images and videos, we can confirm that it was a tornado.”

The storm lasted about 10 to 15 minutes and was followed by alarms as emergency personnel headed to the Mapleview Drive and Prince William Way area.

“It looks very symbolic, unfortunately, to a war zone in places,” said Barrie police spokesperson Peter Leon. “The damage is catastrophic. It is significant, and it is major.”

Lehman said the day’s events brought him back to when a tornado struck the Allandale area in the 1980s.

“I’m sure that people who lived through it in 1985, they can’t believe, like I, that here we are dealing with another serious tornado in the city of Barrie.

But I can’t tell you how incredible it is that nobody has been killed, and I hope that as all the secondary searches are completed, and the patients are treated at the hospital, that it continues to be the case. This certainly could have been a much more serious disaster,” Lehman said.

The Barrie hospital’s president and Chief Executive, Janice Skot, said staff and physicians were on standby “should extra resources be required.”

In addition, Simcore County Paramedics offered triage at Saint Gabriel the Archangel Catholic School to any person injured in the storm.

Police are asking any person who does not live in the area to avoid it.

Premier Doug Ford posted to social media expressing his sympathy for those affected by the storm.

“My thoughts are with everyone in Barrie and Innisfil affected by the severe weather today. A big thank you to our first responders that are currently on the ground helping the situation. Please stay safe everyone!”

Environment Canada said it would send a team to survey the storm damage in Barrie.