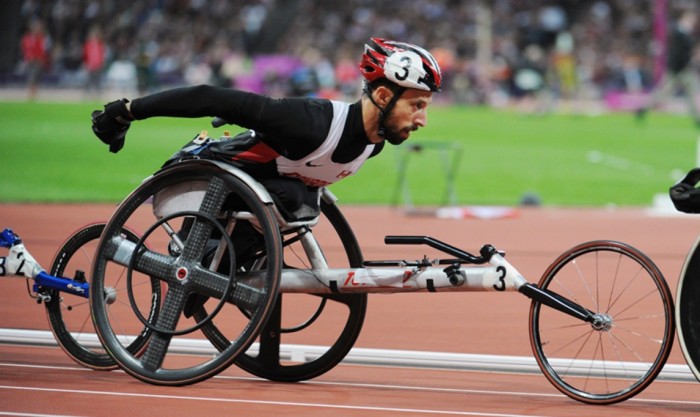 Dorval native Brent  Lakatos captured his third gold medal of the world para athletics championships on Thursday with a victory in the men’s T53 800-metres. Lakatos had already won gold in the T53 200 and 400 metres at the worlds. He will race for the 100 metre title on Sunday.

Legendary Canadian wheelchair racers André Viger and Chantal Petitclerc were big influences on Brent Lakatos who is currently carving his own path to greatness.  It was Viger who introduced Lakatos to wheelchair racing and provided him with his first chair for the sport, a piece of equipment previously owned by Petitclerc.

At age six he was involved in a skating accident playing hockey. The impact of hitting the ice caused a blood clot to form in his spine, which resulted in paralysis. With the support of his family, from the moment he put on the gloves and pushed off, Lakatos has just kept going faster and faster. He enjoyed another super season in 2015. Three gold medals at the Parapan American Games in Toronto and four medals, including three more gold, at the IPC World Championships.

Lakatos took three Paralympic silver medals at London 2012, and four gold and one silver at the 2013 IPC World Championships in Lyon, France. In May 2014 he broke his own world record in the 100m T53 at the IPC Athletics Grand Prix in Nottwil, Switzerland, clocking 14.17.

The world para athletics championships runs until July 23. Canada has 25 athletes competing at the event.