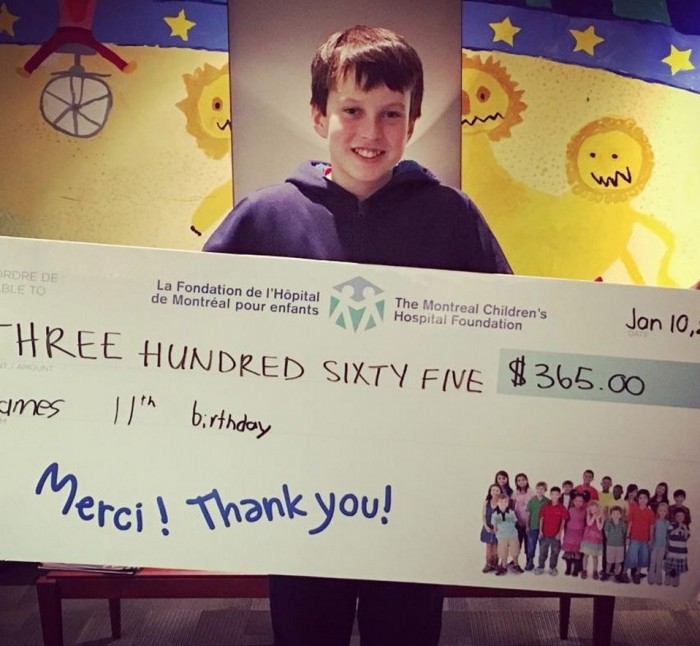 After a flush Christmas of gifts and happiness, James Thomas Lowden celebrated a birthday on January 10.  It was then that he realized he was very fortunate and did not need anything else and wanted to give back to the Montreal Children’s Hospital that was so good to him in the past.

“I did  this because I didn’t want any presents for my birthday because I got everything I wanted for Christmas,”James explained.  “When I broke my thumb last summer I was scared but when I saw these other kids at the Montreal Children’s with worse problems I realized that my thumb was nothing in comparison to what some of these kids go through and I wanted to help them out.”

James’ dad Kevin Lowden has always been very proud of his son but did not realize the depths of his respect and compassion for others until he made this donation.

“As a parent I am super proud of him,” Lowden said. “I already know he is a polite boy and respectful of others. But when he told me this is what he wanted to do I was speechless. Most kids would just buy video games or candy. So when he said he wanted to donate I didn’t hesitate to say yes.”

As a thank you from the hospital Little Lowden has been invited to the P.K.Subban Atrium at the hospital to partake in a dinner for ambassadors.  It is not confirmed that Subban will be attending but he is hopeful.