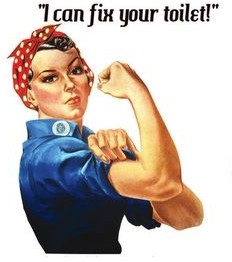 My doorbell rang a few times so I ran to answer the door.  It was a man who came to fix our broken furnace.  He was probably around my age, early 40’s.  No, that’s not true!  Early 50’s is more like it.  Sorry, I tend to feel ten years younger on most days.  I’m wishfully forgetful all the time. 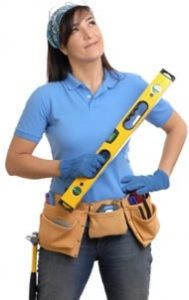 I take him to the electrical breaker panel.  I show him where the breaker is to turn off the furnace.  He then goes back to the furnace to fix it.  When he was finished fixing the problem, he explained to me what was wrong with it and what needed to be done.  I listened intently to him so I could follow his “shop talk”.  Perhaps my face looked a little confusing to him because he suggested that he speak to my husband to better explain what he did.

THAT’S WHEN I LOST IT!

Firstly, I know my home better than anyone who lives in it.  The next best person who knows my home is my contractor.  My husband doesn’t know much about the home he lives in.  In our marriage, this is my job!  What infuriated me was the way I was spoken to, simply because I am a woman.  It wasn’t about politeness.  It was about being female and the assumption that I didn’t know much about the male dominated field of construction.

This isn’t the first time this has happened to me. It happens all the time.  I always think to myself, ‘If I was a man, I would be treated so differently – so evenly – so equally.’ Again, this isn’t about politeness.  This is about questioning my ability to navigate in a male dominated field.

Not too long ago, the same sort of thing happened with a plumber.  We had a pipe burst on the outside of the house. Of course it froze and blew up.  A plumber came to fix it.  Once he was in our home, he looked at both my husband and I, and then proceeded to ask my husband where the water main valve was.  WRONG! My husband doesn’t know 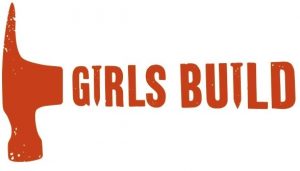 where it is.  He then asked me where the water main valve was so he could turn it off.  He just assumed that my husband would know this better than me. Really? And… do I “happen” to know where the furnace is located too?

Not long after the furnace repair guy and the plumber visited my home, I was visited by a window salesman.  This was a dry call to my home.  When the doorbell rung, I was met by a man who asked me, “Is the man of the home available?”  In my deepest male sounding voice, I replied, “You’re looking at him!” I felt Caitlyn Jenner kind of empowered.  That’s right! I’m the man and the woman of this home.  This is my castle.  This is my turf.  This is my kingdom. Now…”Get off my plane!” – Harrison Ford in Air Force One.

Assumptions are a bad way to go with people.  I suggest equal treatment is the best way to go with everyone. Besides…today… gender really doesn’t matter, does it?

Suzanne Reisler Litwin is an instructor at Concordia University in The Centre for Continuing Education. Suzanne is a freelance contributor to The Suburban newspaper.   She is the author of the children’s book, The Black Velvet Jacket. She lives in Montreal, Canada with her 3 children, Allyn, Taylor, and Duke and her husband Laurie. Suzanne contributes regularly to West Island Blog under her column Keeping it Real.  Please visit her website  www.suzannereislerlitwin.com  to read more of her published articles, books, and poetry.