Home Community Docs suspect contaminated flood water landed Pierrefonds resident in hospital
Share
Facebook
Twitter
Pinterest
WhatsApp
Pierrefonds resident, Debbie Praw was in a state of fine health up until last Tuesday, April 30. She found herself admitted to the hospital after passing out from blood loss during urination. Doctors suspect her exposure to contaminated water due to the flood has caused an infection in her kidney. She is slated to undergo surgery Friday afternoon.

Debbie was advised in the ER that she should only take quick cool showers and no bath during an alert.

“I have not taken a sick day in six years,” Debbie said from her bed at the Lakeshore General Hospital. “They tested me for everything and I am otherwise in good health.”

Debbie chose to post her story on Facebook to alert others that though the city sends out a boil water advisory for drinking she now knows it should extend to bathing.

“Doctors said a sponge bath would be preferable to submerging yourself in the bath, which is what I was doing,” she continued. “I saw the water was cloudy but I never thought it would cause me any harm.”

Debbie lives on the border of Ste. Genevieve and Pierrefonds and saw the boil water alert on the Ste. Genevieve/Ile Bizard billboard as well as on 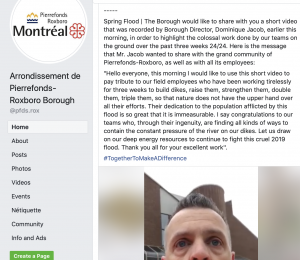 “I live on Aumais in Pierrefonds, part of my street is Ste. Genevieve corner of Harry Worth where it was all sewer back up,” Debbie explained.  “There was an advisory not to consume water even boiled. I bought bottled water for myself even my pets. I knew nothing about not bathing in the water that contained bacteria. I ended up in emergency hemorrhaging in my urine. They admitted me. I have been here 3 days they put a catheter right away.”

Debbie was waiting for surgery at the time of publication.

Pierrefonds has not issued a boil water advisory as of May 3.

“We have not issued a water advisory during the 2019 Spring Flood,” said Pierrefonds Mayor Jim Beis. “The resident lives on the border of Pierrefonds and Ste. Genevieve, her alert may have come from Ile Bizard.  We have not had problems with our sewers during this initiative. Pierrefonds water is checked daily. We will be sure to advise if there is a need. We take a boil water advisory very very seriously.”