“We don’t have clue when they will be picked up. Trees and branches were supposed to be picked up by May 11,” complained Gables Court resident Louis Morin. “That time has been and gone.” 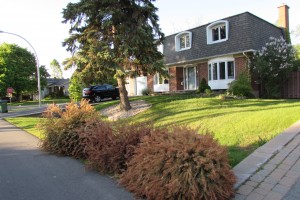 “Many residents didn’t know that Christmas trees were no longer being picked up by garbage crews,” Councillor Pierre Demers explained in an interview. “The city no longer picks up Christmas trees because it can no longer send wood to landfill sites. Individual residents now have to bring them to a city chalet as in years past,  or keep them until Spring for disposal with the branch collection.”

Demers personally delivered notifications to all the homes in his district that had trees by the side of the road which explained the change in services. He then helped in bringing those trees to the nearest city chalet.

District 4  is Beaconsfield’s only dead-tree-free district, thanks to Demers’ initiative.

Although the city had advised residents in its monthly newsletter that for a limited time after Christmas, it would pick up the trees, the message clearly didn’t get through to many.

It also neglected to inform them of the late mid-January cut off date for the service and didn’t mention that the trees would no longer be picked up in regular garbage.

Consequently, many Beaconsfield streets are still scattered with highly flammable dead Christmas trees that the city was slated to pick up by early May.

According to district 3 Councillor, Wade Staddon, citizens need to take more responsibility for keeping abreast of the city’s many attempts to communicate with them.

“The city is not a store having a sale and advertising in the Publisac,” he wrote in Beaconsfield’s December newsletter. “it’s the level of government with the greatest impact on your daily life [that is] trying to tell you something. Please absorb the message to see whether or not it affects you.”

“I agree that they have to manage costs, but they said that they would pick them up and haven’t,” Morin added. “It is not only me. It’s everywhere in Beaconsfield, and it looks like [expletive delted]. When I saw my tax bill, I figured that they can do better.”