If you’ve tuned in to the West Island Blog Facebook Page on a Friday evening in the last 11 weeks, you might have landed on our Friday 8 pm “Watch Party” featuring a weekly live concert from Jeff Smallwood, singer/songwriter, guitar player “par excellence”, directly from Cunninghams Pub in Ste-Anne-de-Bellevue.

When forced to close Cunninghams to the public in mid-March, owner Jim Beauchamp reached out to his long-time friend Jeff Smallwood, asking him if he could do a short performance from his home-studio. Having played at Cunninghams Pub numerous times since its opening 15 years ago, Smallwood suggested that he perform live from the empty pub, in order to keep that “local pub feeling”. Beauchamp was thrilled with the idea and the first “Friday Night Pub Night at Home – The Sessions” aired on April 3rd.

During the first session, Smallwood joked “I’m suspecting that Jim thinks this is going to happen more than once, so I might have gotten myself in a little bit of trouble!”

The first three editions of “Friday Night Pub Night at Home – The Sessions” were filmed on Beauchamp’s cell phone, which resulted in a few technical problems. On week 4, Matt Cool from The Aileron Group reached out to Smallwood and offered to help with audiovisual.

Both Jeff Smallwood and Aileron have been giving their time freely for the last 11 weeks.  Before our part of the globe was forced into isolation, Smallwood was playing guitar for Céline Dion’s Courage tour and was set to play in NYC before being sent back home. According to Team Celine, the tour isn’t set to resume until November.

On several occasions “The Sessions” have served to raise money for local charities, for a total of over $17,000.  Charities include the Ste-Anne and Pincourt food banks.

This Friday, June 19th, will mark the 12th and last edition of “Friday Night Pub Night at Home – The Sessions”. Beauchamp mentions that “These sessions have given people something to look forward to. People have tuned in from Barbados, Switzerland, Rouyn-Noranda and New York, to name a few, and we’ve attracted over 80,000 viewers… I’m the one who’s benefited the most from this! Jeff and Matt’s team have generously given their time and I want to do something special for them!”

That’s why, for this last edition, a virtual tip jar will be set up on Cunninghams Facebook Page.  With the click of a button, all viewers will be able to donate to the tip jar. All monies raised will be divided between Smallwood and Matt and Oz from The Aileron Group. This last session will be streamed live on the West Island Blog Facebook page.

Cunninghams Pub is an excellent destination for an evening out with pleasant conversation or as a gang having a party. They have great live music Fridays and Saturdays. Contact them for your next office party, birthday or special event.  They can organize special fundraising events for your charities or groups. For further info, contact Jim at (514)457-0080 or by email at cunninghamspub@live.ca !

Born in Ste-Anne-de-Bellevue, singer-songwriter-musician who’s released 6 solo albums. Smallwood is a well-known and sought-after artist in Canada, having participated on some 300 recordings by artists ranging from Luba, Richard Séguin, Roch Voisine, Kevin Parent, Isabelle Boulay, Céline Dion and many others. He currently lives in Ste-Anne-de-Bellevue with his wife Mélanie and his son Noah. 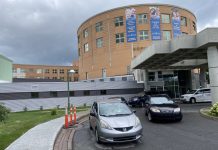 VIDEO tour of the new temporary ER at the Lakeshore General...