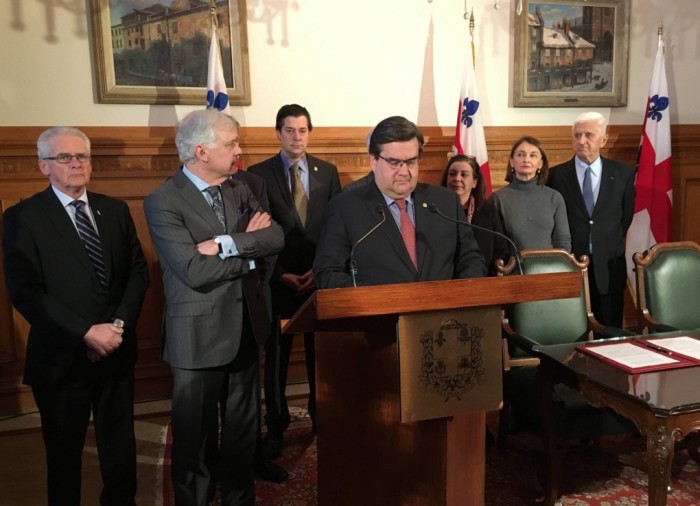 On the tenth anniversary of the merger/demerger discussions, Westmount Mayor Peter Trent representing the Association of Suburban Mayors (ASM) and Montreal Mayor Denis Coderre signed off on a two long standing expenses for the15 demerged cities, water cost sharing and Montreal City Centre expenses. Two issues that have plagued the relationship between the ASM and Montreal amongst others that make up a $400 million bill for the 15 municipalities each year.

“I am not sure why this took so long,” Coderre said in a press conference on Friday March 4, “but Mayor Trent and I simply sat down and arrived at an agreement that is acceptable for everyone.  It only took two meetings.”

Both Mayors agreed on the importance of simplicity when figuring out how demerged cities should contribute to Montreal’s city centre.  In the past the 15 municipalities paid more than $6 million to the expense.  As of January 2017, the fixed price will be $8 million guaranteed for the next ten years.  Given the 375th anniversary of Montreal expenses were expected to rise in the coming year.

“This is a win win situation for all of us and long over due,” said Kirkland Mayor Michel Gibson, “I am happy to share the news with our residents.”

Water that is supplied by Montreal to the 15 cities has been calculated on property evaluation until now.   In the new agreement the calculations will be based on consumption instead.

“This promotes a more sustainable approach to water usage,” Coderre explained, “once the water is delivered to the borders of each city it is up to the discretion of the municipality to decide how they want to charge their citizens.”

“Since the creation of the agglomeration of Montreal in 2005, these two issues remained a bone of contention between the reconstituted municipalities and the City of Montreal. I think it was important to put these behind us and recognize the role of economic locomotive of Montreal and its city centre, and each municipality feels treated fairly,” Coderre concluded.