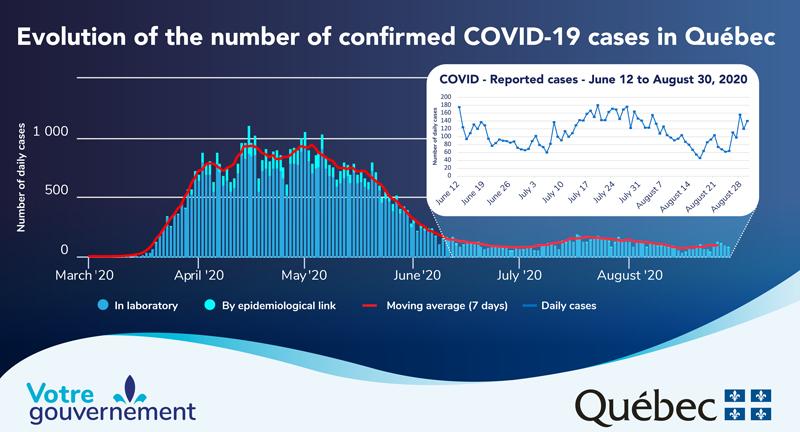 Gearing up for a long weekend, it’s important now, more than ever, to remain vigilant throughout this Labor Day weekend. Not only are more activities resuming, but a resurgence of COVID-19 cases are being reported similar to the data in July per the Quebec Minister of Health, Christian Dubé’s press address. We already know that each of us needs to do our part, but be sure to read the official Quebec guide summarizing the main directives to ensure that you’re not inadvertently putting yourself, or others at risk.

“The fact is that we’ve seen a real increase because we went from 60 cases just a few days ago, 10 days ago, to more than 180 cases per day [187 and 184 in the past 2 days]” warned Minister Dubé. Dubé cautioned of an increase in confirmed cases in the coming days as we receive results from 19,000 new COVID tests.

Dubé goes on to say that the increase in COVID-19 cases is stemming from within the community itself and not schools or long term care facilities. Some examples of these community-borne outbreaks include family get-togethers, gatherings of any kind, and activities of everyday life. Minister Dubé cited a specific outbreak in Laval that stemmed from a simple family dinner. He stated that 17 people attended this dinner and there were 14 cases of contamination in that group alone. These people weren’t trying to hurt anyone, let alone their own family, but they inadvertently caused an outbreak by not following the guidelines that have been in place for some time now. This virus does not discriminate. Knowing the person you are going to see doesn’t mean that there’s any less risk for transmission.

Québec’s Health Minister stated that “the number of cases compared to the population – more than 1 million students are in primary and secondary school – and to see this limited number of cases means that we’ve been successful.” He notified us of 20 “single cases” in 25-30 schools out of the 3000 schools in Montreal. However, the official report on schools with confirmed cases lists 47 affected schools. Dubé is adamant that these cases are mere “bushfires” that don’t translate to outbreaks thanks to the immediate actions taken by parents and staff who are transparently working with the public health department.

Dubé reminds us that the power is ultimately in our hands. Every action we take is a decision made with the potential to cause irreversible harm to an exponential number of people. Make sure you’re actively deciding to stop the spread by following these guidelines to a T. The stricter we are in enforcing these precautionary measures, the quicker we’ll be able to get back to our loved one’s sides. Keep that in mind this holiday weekend. This is an overwhelming time for everyone and we’re all ready to get back to our lives, but if we just stick together and follow the rules we will prevail!

These Coronavirus disease (COVID-19) in Québec statistics are sourced directly from Quebec.ca