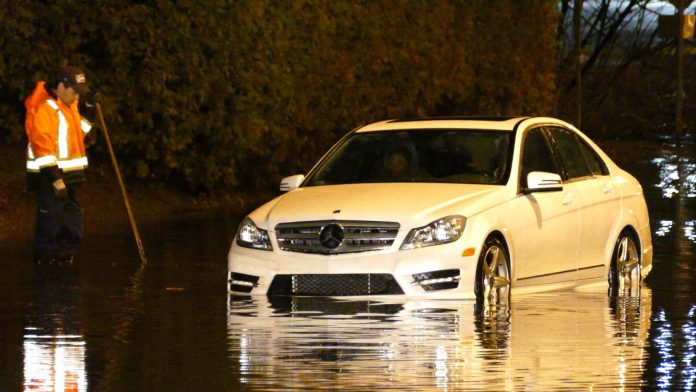 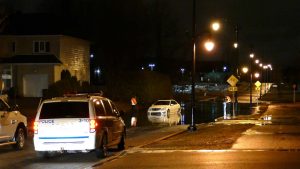 At midnight Sunday, March 29, Ile Bizard public works crews were called in to unclog blocked street drains at the bottom of a hill at the corner of Jacques Bizard Blvd and Lavigne Street in Ste. Genevieve.

“Levels are below the minimal thresh hold for the area,”stated Jim Beis, Mayor of Pierrefonds-Roxboro. “We are in constant review of the situation. Nature is unpredictable but right now things are fine. With all the rain it is possible to get sewage back up at this time. There can be ice in the sewers at this time that can cause blockage.  We have cleared the sewers in Pierrefonds already. Daily updates from our civil security are ongoing in Pierrefonds.” 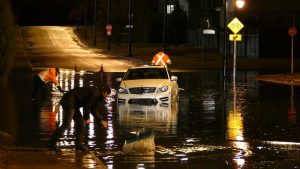 Fire department and police services were notified.  No injuries were reported. Occupants of the car remained in their vehicle throughout the incident. Heavy rain has been pouring onto some regions around Montreal combined with the spring thaw raising water levels.

“There is no risk of flooding at this time,” stated the Mayor of Sainte Anne De Bellevue’s Mayor Paola Hawa.  “We are watching levels like a hawk and there is no need to be concerned. Lake St. Louis levels are fine.”

Authorities in Ste-Therese have declared a risk of flooding after the Riviere aux Chiens river was reported to be critically high last night. More rain is expected today and will likely contribute to potential flooding in the West Island among other areas. 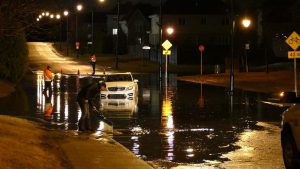