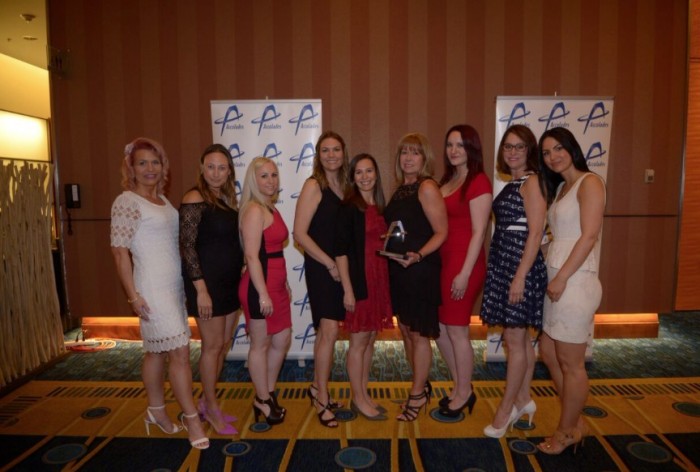 Close to 350 members of the business community took part in The West Island of Montreal Chamber of Commerce’s (WIMCC) 2016 Accolades Gala, on Thursday, June 2nd. Sponsored by Hydro-Québec, the event took place at the prestigious Montreal Airport Marriott In-Terminal Hotel, where the recipients in the 11 categories went up on stage to receive their trophies.

In the Desjardins Business to Consumer Services category, two finalists were awarded with Accolades trophies: Renovco and Aqua Spa Lyne Giroux. In the RBC Royal Bank Distribution category, Andy Transport received the award. In the Paquette & Associés, Attorneys Manufacturing category, the recipient is Delta Pharma. In the category sponsored by PME MTL West-Island, High Technology & Innovation, Novotaste Corporation won the Accolade. For the National Bank Export category, Vortex Aquatic Structures is the recipient. In the Human Resources category, Laurentide Controls received the prize and in the Best Marketing Campaign category, it was Genatec. The Business Development Bank of Canada (BDC) sponsored the Small Business category and Cellier Domesticus received the trophy. For Business to Business Services, Andy Transport received the prize (in addition to the one in Distribution). In the Sustainable Development category, Igloo Cellulose was the recipient and L’Équipe Entreprise won the Partage-Action Community Service Award. The Business of the Year, chosen among the all recipients is Laurentide Controls.

The implementation of the Accolades competition and the organization of the Gala would not be possible without the help of the numerous volunteers and the support of the financial and service partners of the 2016 Accolades Gala.  The WIMCC wishes to thank them all for their support.

The West Island of Montreal Chamber of Commerce congratulates once again all finalists and recipients of the 2016 Accolades Competition.

About the Accolades Gala

The Accolades Gala is the WIMCC’s most important event of the year and it offers excellent visibility to its partners. Every year, the West Island community recognizes the quality of the organization and unfolding of the event.