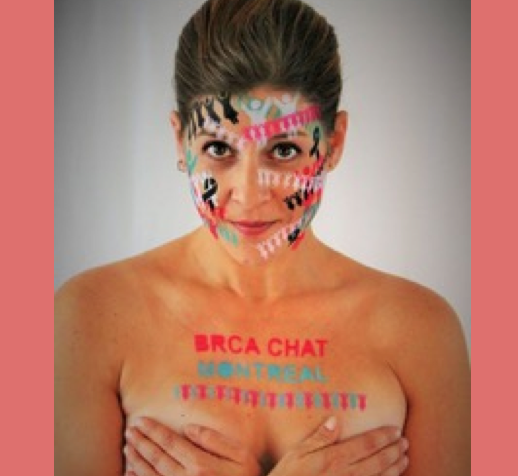 Sitting in a Montreal restaurant with Angelina Jolie, I am overjoyed that I am finally getting the opportunity to thank her for writing her op-ed article “My Medical Choice” in the New York Times two years ago. http://www.nytimes.com/2013/05/14/opinion/my-medical-choice.html?_r=0

I can’t believe that we are actually talking about preventative mastectomies, hysterectomies and BRCA mutations. It’s hard to imagine that only six years ago there was not much discussion about BRCA mutations and hereditary cancers, never mind trying to explain removing healthy breasts to prevent cancer that you might not ever get. This extreme measure is almost too much for most people to grasp and now, one of the most famous women in Hollywood has given us BRCA mutation carriers a voice.  Thank you Angelina…

Then my alarm goes off. A girl can dream!

Two years after Angelina`s announcement in the New York times, genetic testing has gone up over forty percent. Hard to imagine that one women has such a powerful voice but it`s true. Knowledge really is power and when it`s linked to Hollywood and celebrities, word spreads fast. 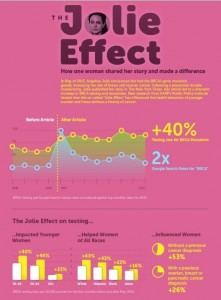 I vividly remember the day that Angelina Jolie`s article came out. Everyone was talking about the risk reducing measures that she had taken to drastically decrease her risk of breast cancer All I could think was “Oh My God, Angelina just had the same surgery as me. Unbelievable! And she’s talking about it! She is giving BRCA a voice’!  I was sad that she was faced with the same stressful decisions that I was and I could not help thinking it was great that someone so famous was going through the same journey and being so public about it.

Reading her article, I felt like she was reading my mind. She was describing exactly what I was feeling and she was sharing it with the world. Regardless of what people would think of her decision, she was starting a conversation. A VERY important one that was being heard, loud and clear!

I am sorry that Angelina Jolie has had to deal with a BRCA mutation and risk reducing surgeries, but I couldn`t be prouder that one of the most famous, well respected ladies in Hollywood is talking about preventative mastectomies and really making a difference. Statistics don`t lie!

There are those who feel that the choice she made was extreme, drastic or even stupid and everyone is entitled to their opinion. I feel that she was brave enough to be public about her choice and because of the awareness she has created with her story, people are listening.  Change is happening. Lives are being saved. 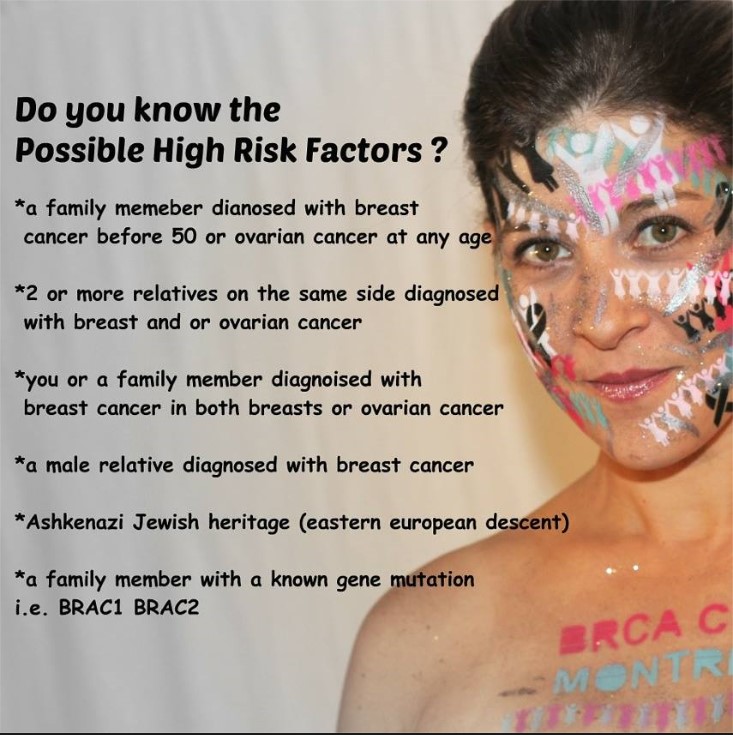 Angelina Jolie’s story is not meant to scare people or to create panic. It does not mean that every woman should rush to the doctor for genetic testing. It does mean that women and men should learn about their family history, ask questions get informed and learn the high risk factors for hereditary cancer.  Look at both sides of your family tree, is there breast or ovarian cancer, what about male breast cancer or prostate cancer? It is also important to know that having a BRCA mutation can put you at higher risks for pancreatic, skin and uterine cancer

Knowledge is power! Be brave enough to start a conversation that matters.

As published in Connect4Cancer in March 2015

Karen Lazarovitz, a BRCA carrier is an advocate for hereditary breast and ovarian cancer. Karen is the founder and Creator of the BRCA sisterhood on Facebook with over 4500 members worldwide and growing daily. She also started the first BRCA support group in Montréal. Karen shares her thoughts every month on Connect4Cancer and has been kind enough to share her posts with the Center for Jewish Genetics. Interested in learning more about Karen? Check out Facebook, Twitter, or Instagram!