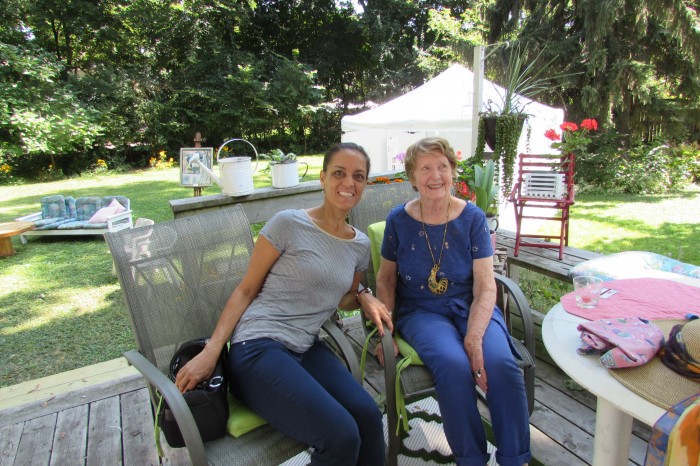 Artist Bernie Kelly Goulem moved to Beaconsfield on Kirkwood Avenue in 1967 into what was once a summer cottage for the wealthy Montrealers.  For the past two weekends she opened her home to show off her art and history for those who wished to take a walk back in time.

According to Bernie, Kirkwood Avenue was once owned by William Mulvey Kirkwood, who bought the property stretching from the tracks of the Grand Turk railway to the lake for $5,000 in 1881 and then parcelled it out in lots of 15,000 square feet for a price of $100 each.  On six of these lots identical homes were built and it became Kirkwood Avenue.

“After World War II, there was a need to cover up the original decor of wood floors and brick and modernize it paint and plaster,” Bernie told The Suburban in an interview, “I have spent my time restoring it to recapture the old charm.  I am a painter.  My major work of art has been this restoration.”

Goulem paintings are meant to express the joy of being alive.  Inspired by the human body in motion she uses a bling drawing technique to capture the passion for living.

As a send off to her home and the show aspect of her career Bernie opened her home up for one last hurrah..  The public was welcomed to take a walk back in time, visit the lake or take a walk through the Pointe Claire Village just steps away.  Bernie was there to say hello and tell stories of her life that included coming to live in Montreal as a young woman and in recent years her visit to Bukingham Palace to attend her great niece’s, Autumn Kelly, marriage to Peter Philips son of Princess Anne.