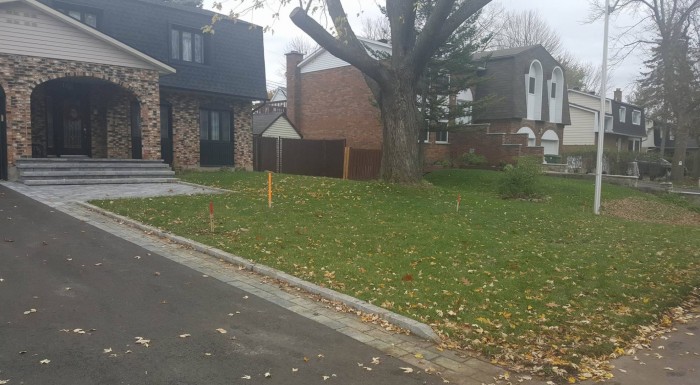 After weeks of trying to contact Beaconsfield city elected officials, Melanie Oana took to Facebook last night in a desperate attempt to be heard by her city council.

The story begins months earlier when architect Corey Black drew up plans for his friends Melanie Oana and her husband, Stathy Papachronis. The work was reviewed by the urban planning department which included covering the ditch and providing proper drainage as well the felling of a large tree on the front of the property. The felling of the tree was refused by the city but nothing else was mentioned about the ditch until after the work had been completed.

“I drew up the plan for the driveway for this family to take to the city for the permit (as a thank you for how awesome they were as co-coaches of my son’s soccer team),” Black explained in a Facebook exchange. “I am stunned that there could be ANY confusion as to what work was being proposed.”

“I arrived home from work tonight to see the markers for digging placed on my lawn,” Oana said through tears on her Facebook live video where she pleaded for anyone to help her get in touch with Beaconsfield’s Mayor Bourelle who was elected for a second term just 24 hours before. “I find it timely that the markers to dig came up just after the elections. I feel so violated and feel like they are targeting my family. I hope no one will have to go through this.”

At 9:24 pm, just one hour after Oana went live on Facebook,  she received an email from Beaconsfield’s Director General Patrice Boileau promising word from someone once the new council was sworn in this coming Friday.