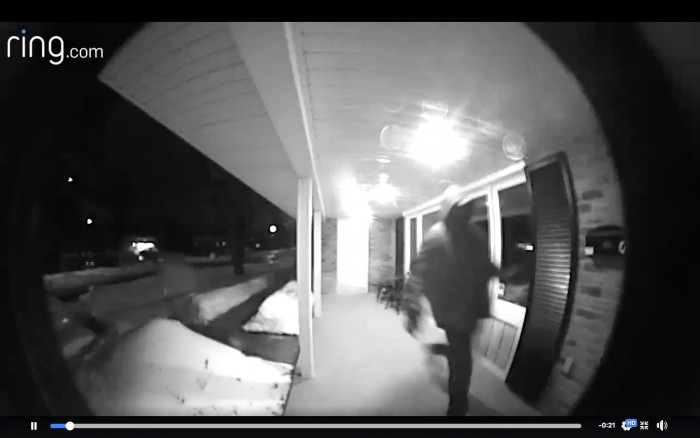 Family heirlooms, jewelry, and cash have been the focus of numerous robberies, as many as three on some nights, in Beaconsfield in recent weeks. As explained by Chief of PDQ Station 1, Martin Bernier at the January public meeting, the break-ins took place between 18:30 and 22:00 Hrs. The thieves entered through the rear doors.

Residents on Gables Court, Greenwood Crescent and Hampshire are speaking out on the Beaconsfield Neighbours for Neighbours community Facebook page with more than 1,100 resident members,  to warn their friends about the intrusions.

“We live on Hampshire and got our front door kicked in last night,” said Beaconsfield a resident who preferred to remain anonymous. “The thief went straight for my jewelry but he only found my costume jewelry thankfully. We weren’t home but have “Ring” doorbell, so we got the alert someone was at the door and saw the video of him kicking in the front door.The alarm went off, so he had maybe six or seven minutes inside our home.”

The Ring Video Doorbell lets you answer the door from anywhere with your smartphone. Connects to your Wi-Fi network and works with iOS and Android devices.

Police confirmed that all homes had alarm systems but, by the time the burglar alarm companies make their verification and then call the police, the burglars have a bit of time to spare and concentrated in bedrooms and bathrooms, looking primarily for cash and jewelry. Police encouraged citizens to call 911 and report all unusual and suspicious activities indicating that often small pieces of information are part of a bigger puzzle and adding these bits of information can often lead to positive results.

Residents also reported in many cases that they found footprints in the snow near first level windows.

“A solid case can be made for us as citizens to at least communicate the street names (only) where we hear of break-ins taking place,” Descheneaux explained. “It is a great incentive to make people alert and be on the lookout for suspicious activities.”

“Beaconsfield residents who are our members need to pull together with other citizen groups and use our websites and social media venues to share information as soon as we learn of break-in activities taking place in our neighbourhoods. This is key.”

Both Beaconsfield Neighbours for Neighbours and The BCA can be followed on Facebook.