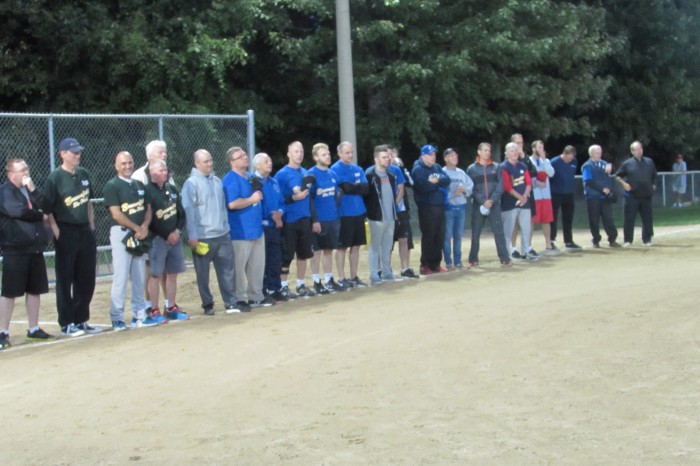 If you live in Beaconsfield, you know someone who knows someone who is a member of the Beaconsfield Slo-Pitch League. When a friend suggested I cover the moment of silence that would take place at 7:30 p.m. on September 11, to honor fallen player, Mark Pogue, I grabbed my gear and went.

Mark passed away suddenly last winter and his family of slo-pitch friends are never going to forget him. They made that very clear tonight. This year all their shirts are marked with his initials. Their annual charity tournament was dedicated to him. They honored Mark with a service at 7:30 a.m. on September 11, at the ball field because according to long time friend Mike, that was his favorite time of day. An additional moment of silence attended by close to 100 of his teammates, friends, and his family lined up along the field was marked that evening.

“I did not understand tthis team was about for a very long time,” Sue Pogue explained to the emotional crowd. “This league got in the way of our Sunday dinners all through the summer. But Mark was good about it; he would always help me prepare dinner before he left for ball. But in the past few years I understood.  You were there for him when I got sick and he has been there for many of you in troubled times. This is not just a ball league; you are friends that support one another when the hard stuff happens. You are family and lucky to have one another. Carry on.”

Hugs, tears, and stories of Mark were shared amongst new and old friends in a park filled with people who will never forget who he was and how he impacted their lives.

My condolences to you Sue and to your family.