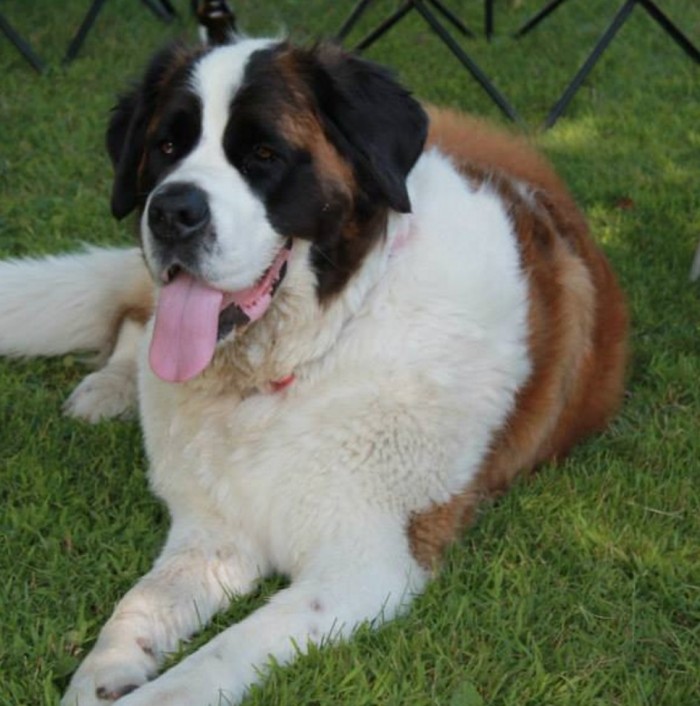 Charlie is a female 5 1/2-year-old Saint Bernard, who lives in Beaconsfield with her guardians Lorie Marcotte-Roberts and Dennis Roberts. She has a brain tumor. She has regular seizures and takes phenobarbital.

Last week when the Roberts tried to pay only one of the compulsory two years invoiced by the City for Charlie’s municipal dog tag their cheque was promptly returned in person by public security.

“I left a $12 cheque for my dog license at City Hall with a note stating Charlie had a brain tumor, and I was not sure how long she would last and wanted to pay on a yearly basis instead of the compulsory two,” Marcotte-Roberts explained.

According to Marcotte-Roberts when she called City Hall for clarification she was told that even if she paid the full two years, she would not be reimbursed for the second year should the dog pass away within the first year. No reimbursements, no exceptions.

“It is not about the money,” Marcotte-Roberts assured, “but about the principal of the issue. Why am I paying for a license in the second year if there is a possibility that we might lose our girl long before that? It would be one thing if they would reimburse the second year in the event of death,  but they won’t so it is just over taxation.”

According to Beaconsfield Councillor Karen Messier, the city adopted changes last year to bill residents every two years instead of every year.

“I am very sorry to hear of her dog’s health issues, and I empathize with her situation,” Messier said. “When an invoice is payable in full, one cannot arbitrarily decide to pay half the amount no matter what the reason. Had she called, the staff would have reminded her of the changes, including the fact that the cost of the license is non-transferable and non-refundable.”

According to Messier, the change of billing schedule of more than $40,000 over two years,  may well generate more complaints though she has not heard of any since the change occurred in December of 2015.

“Administering minor adjustments (of $12) to invoices of $24.00, when there are 1700 dogs licensed in the city, is an obvious consideration,” Messier stated in an email exchange. “If Mrs. Marcotte or others object to the bylaw they can communicate their feelings to Council, and I would be willing to raise the issue at caucus. But we cannot make exceptions to the existing bylaw in its present form, no matter how sorry we feel for individual situations.”