Beaconsfield resident Scott Hebert presented a petition with 100 names from the surrounding area of Taywood Park where a cell antenna by Telus was slated to be erected on a Hydro poll in front of his house last Friday.

After the family spoke to the cell phone company, they did not put in the antenna, prompting Hebert to seek help from Mayor Georges Bourelle at Monday night’s council meeting.

Hebert noted that the city currently “has no policy for the sighting of towers and antennas unlike Pointe Claire, Baie d’Urfe and Kirkland. Because there are no guidelines in Beaconsfield, the cell phone companies have free range.”

Bourelle voiced his sympathy for the family and those who signed the petition but reiterated several times during Question Period that “cell tower installations is a federal jurisdiction under Industry Canada so I cannot answer you right now.  We have spoken to Lac St. Louis MP Francis Scarpaleggia on this issue and we will be checking things out.”

Jim Papelians, who had an antenna set up on his residence at Mariane Avenue five years ago asked council why the unit is humming louder than usual these days. 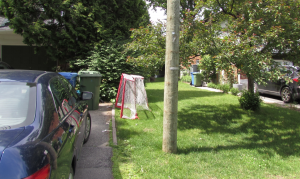 Papelians also cited a response he received from a letter by Minister of Industry James Moore  recently that said  “it is important that local governments play a central role in identifying potential locations for new antenna towers in their communities by working with the wireless industry.  Municipalities must ensure that local residents are at the centre of the process that will help determine the location of a new tower in their community.  That is why, on February 5, 2014, I announced improvements to our antenna tower consultation process.  As part of the process, municipalities are encouraged to develop their own antenna tower siting procedures in order to further strengthen local input.”

Bourelle informed Hebert that the city would write a motion that will refer this petition to the federal government.  Bourelle also suggested, because cell tower and antenna installation is solely a federal issue, “go after your local MP and put the pressure there.”

Council also rolled out its new garbage policy that will begin as of January 1st, 2016.  Residents will be offered one free garbage pick up a month with three container, pickup options and payment plans.

A information pamphlet was handed out and all residents will be receiving one at their homes in due time.