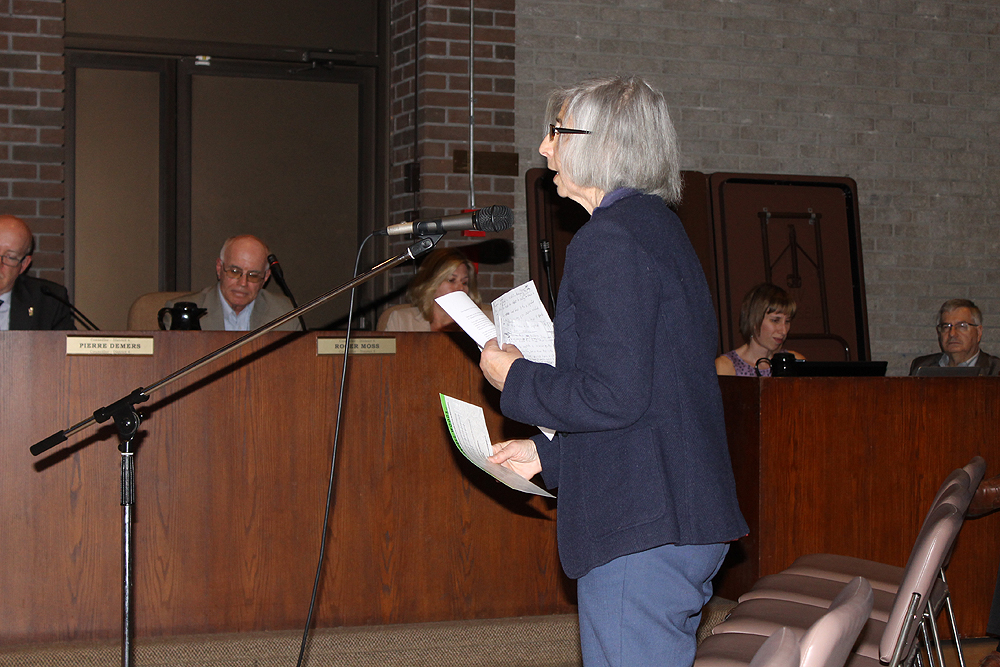 The ongoing saga to determine the fate of Beaconsfield’s Angell Woods took another turn at the May 26 council meeting with Mayor Georges Bourelle tabling a motion that included $250,000 being allocated from the unappropriated budget surplus to the Woods’ preservation fund. The motion carried with five of the six councillors’ approval while District 4 Councillor Pierre Demers opposed.

“At the April council meeting, you passed a resolution designating the ecological value of Angell Woods,” said private landowner Diana Shahmoon, President of Seda Holdings Ltd. that owns just under 2 million square feet of the woods.

“You made no effort to notify the landowners about it in advance – we heard about it from a reporter.” Shahmoon went on to say the city did not share any of the flora and fauna studies with the landowners, namely Yale Properties Ltd. and smaller parcels belonging to conservation organizations including Ducks Unlimited, the Association for the Protection of Angell Woods (APAW) and the provincial and municipal governments. Shahmoon maintains the claims the woods’ ecological value needs to be substantiated by an impartial party and approved by both sides.

“Tonight the council is voting on a resolution to protect the wetlands of Angell Woods, and it has been handled in the same manner. We have not been advised about it beforehand,” said Shahmoon who took the opportunity to use the public forum to submit a second protest letter to the Town Clerk Nathalie Libersan-Laniel.

Shahmoon reminded council that her family had been paying taxes in Beaconsfield for 60 years but had recently stopped, citing a more fair response from the judicial system than the town has ever had.

“Angell Woods’ landowners have a great reason to be skeptical of Beaconsfield’s motives,” she said, describing the passing of resolutions in a “covert” manner compromising trust in negotiating a resolution.

Shahmoon displayed a bilingual colour flyer that was in the process of being distributed to every Beaconsfield resident, describing what the landowners said the city has done in the past in relation to the woods and what the landowners feels the city should do to reach what it calls an ethical solution.

The suggested measures include securing portions of the woods for nature and recreation and developing areas for affordable housing, thereby increasing the municipal tax base. The landowners are calling for fairness and transparency in obtaining a resolution that will see them receive fair payment for their land.

The allocation of the $250,000 from the surplus to the woods’ preservation fund was questioned by meeting attendee and former District 6 Councillor Rhonda Massad who asked for further clarification of the funds’ distribution. While Bourelle offered to explain the numbers in detail to her after the meeting, Massad suggested the information would be of interest to everyone in attendance.

“If you’re speaking for the crowd then maybe come up here as a councillor,” said Bourelle to an audible response of shock amongst the attendees.

“Maybe you don’t need to explain the working fund or the surplus,” retorted Massad. “I could. But I’m not a councillor.”

The apparent stalemate was interrupted when District 6 Councillor Peggy Alexopoulos asked the mayor to move on before District 5 Councillor Roger Moss intervened saying, “It should be (explained), the amount of money that’s being transferred.”

Bourelle conceded, reading the description, in French, at a noticeably accelerated pace, and concluded by saying, “The question period is over.”

In an interview following the council meeting, Councillor Demers told Your Local Journal he voted against the quarter-million dollar Angell Woods transfer fund based on his campaign promise to find a fair and equitable solution towards the preservation of Angell Woods at no cost to taxpayers.

“I supported this council when they mandated the City of Montreal to negotiate to purchase those woods with the owners directly,” he said.

Shahmoon said that though it was suggested by Bourelle that she meet with Montreal’s Executive Committee Réal Ménard, the meeting has not yet materialized. Shahmoon said Beaconsfield’s accumulated resolutions are an effort to make the land an ecological area to be preserved and then to devalue the development market value leading to possible expropriation.

She further suggested that following the 2014 implementation of the Plan Métropolitain d’aménagement et de Développement (PMAD) requiring a mix of Transit Oriented Development (TOD) zones, the city is attempting to exempt themselves from the TOD designation being one of the few remaining green spaces on the Island of Montreal.

“Meanwhile, the green space is being undermined by the dog-walkers and the trespassers,” said Shahmoon. “They (Beaconsfield) are undermining the rule of law and the democratic process. They’re not respecting the land that they want to preserve.”