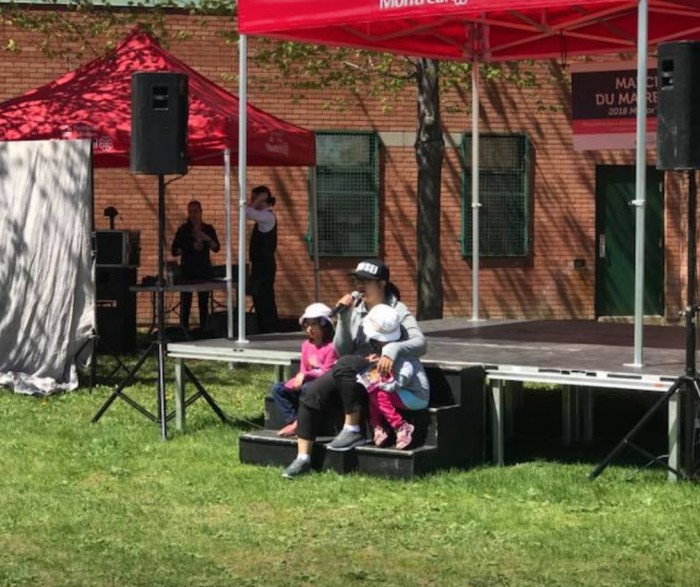 Baie D’Urfé’s Raji Sidhu walked 12 km in the Pierrefonds Mayor’s Walk held on Saturday, May 12. She was greeted by her two daughters and husband at the finish line. The walk began at the Bois-de-Liesse nature park and ended at Grier Park in Pierrefonds.

” I was six years old when it started. It continued with my uncle all through elementary and high school and the first year of John Abbott when I finally told my parents,” explained Sidhu as she addressed a crowd of 200 walkers. “We struggled through a long judicial battle which ended with my uncle being acquitted.”

“I didn’t give up hope,” she continued with her daughters at her side. “I am here today with my daughters and my husband. Violence against women and children happens a lot. What we can do and what we don’t do enough is say something. If you see something towards children – say something. My kids are your kids and your kids are my kids. Protect them. We are walking for the next generation.”

Sidhu explained that her uncle has recently been charged again.

“My message to those who have suffered is don’t let your whole life be dictated by your past.” 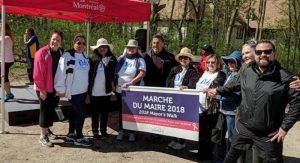 “The walk serves many purposes,” said Pierrefonds Mayor Jim Beis. “To bring the community closer together, to get people out and active but this year it also served to raise awareness of violence against women. All in all, it was a great day and everyone enjoyed it.”

The 12km walk included a lunch breach and various kiosks and an art exhibit.

“The reason why I chose Grier park this year as the end of the walk and not Cap St-Jacques is that we have a ‘Say No To Violence’ site in that park in memory of 3 Pierrefonds Women who died in tragic circumstances Anne-Marie Edward, Janet Kuchinsky, Kelly-Ann Drummond.”