According to Baie D’Urfé Mayor, Maria Tutino, the town applied for 12 government grants last year. Today, March, 12, Mayor Tutino in the presence of Francis Scarpaleggia, Member of Parliament for Lac-Saint-Louis, and Geoffrey Kelley, Minister Responsible for Native Affairs and Member of the National Assembly for Jacques-Cartier called a press conference to announce that both Canada and Quebec would be investing $90,000 each to improve Red Barn Park.

“This is an example of all three levels of government working in tandem for a better quality of life for our citizens,” Scarpaleggia stated.

This financial support comes from the New Building Canada Fund, Provincial-Territorial Infrastructure Component—Small Communities Fund. The City of Baie-D’Urfé will also invest almost $90,000 to bring the total government and municipal investment to more than $268,000.

“We applied for 12 grants, while this would not have been our priority, it is the one we got, so we are happy to have it,” Tutino explained. “We are a small town with big dreams.”

Tutino indicated during her speech that she would be knocking on both the federal and provincial doors for more assistance to improve the quality of life for Baie D’Urfé residents.

The grant is divided into two projects. The first project involves upgrading a multi-purpose playground at the Red Barn Park for year-round use to accommodate public skating in winter, and basketball and ball hockey during the summer. The second project involves upgrading the local curling club’s refrigeration system. While the parks are accessible by wheelchair, the playground equipment will not be improved to allow for universal access at this time.

“Parks fall under the mandate of each municipality,” explained MNA Geoffrey Kelley. While Kelley did not know off hand if there were specific grants for inclusive parks, he indicated that it is up to the municipality to express their needs during the grant application process. 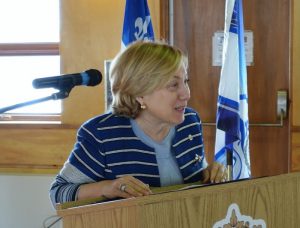 According to Christine Latreille of strollerparking.ca, there is a shortage of inclusive parks on the Island of Montreal. Latreille meticulously categorizes the hundreds of parks she reviews to make it easier for parents to bring their children to parks where they know they can play.

“Parents are looking for specific features,” Latreille says, “such as fenced playgrounds for autistic children, adaptive swings or wheelchair-accessible play surfaces. Depending on where they live, parents of children with disabilities sometimes have to drive an hour or more to find a suitable park. Hearing-impaired children with cochlear implants can’t use regular slides because the static can short out the implant. A roller slide is as much or more fun than a regular slide, without the problematic static.” 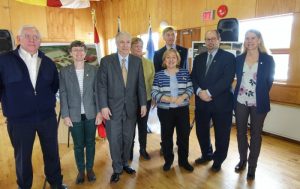