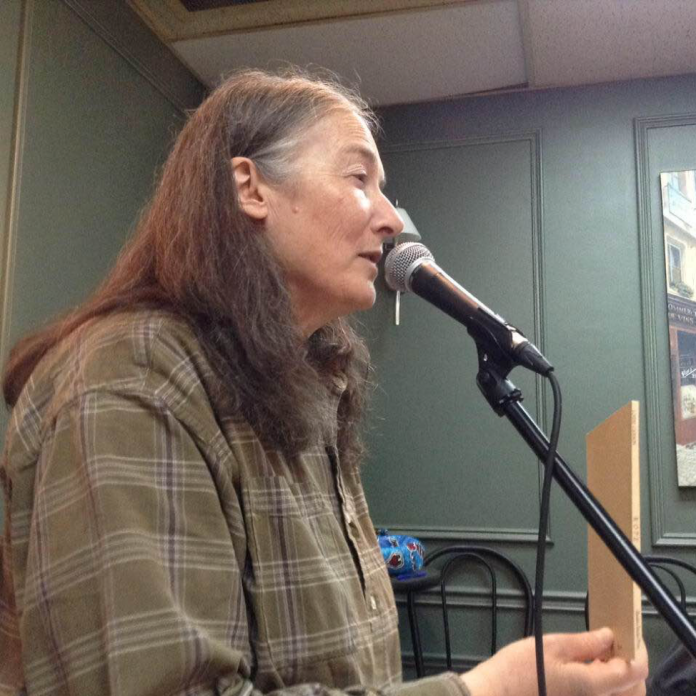 It is from the quiet of her home in St-Lazare, nestled among the tall trees, thick brush and abundant garden, that Louise Carson has been turning out book after book of literary delight over the past few years: from numerous collections of poetry with Broken Rules Press and Signature Editions to a series of Cat murder mysteries not to mention the Chronicles of Deasil Widdy, a historical fiction trilogy.

“I do recall becoming a writer but not when I decided. It was more that the muse grabbed me by the throat. The reason? I suppose it was because when my mother died in 2006 I spent a few months in deep grief, then began reading poetry looking for solace. A few more months passed and poems began pouring out. Prose followed a few years later, then books,”  says Louise Carson when asked about the beginning of her career as a writer. “When I began writing full-time in 2007, the muse worked me and I wrote all the time, sometimes waking up in the night to scribble.”

Her days are spent between writing, feeding the pets, walking the dog or working in the garden in St- Lazare where Louise lives with her daughter.

“In the afternoons other stuff happens. I might do research in the afternoon or evening. Yes, I do have a schedule, if I’m writing a book. Otherwise, I just take my literary tasks as they come, might set aside one or two days a week to review how various projects are going. And the schedule for writing a book is almost always mornings.”

When asked if she has encountered any obstacles or has had any bouts with writer’s block, Carson replies with that all-knowing twinkle in her eye as if she had expected the question:

“Obstacles? I can’t really think of any. To me, it’s the act of writing that’s important. I’ve experienced no obstacles to that besides illness. And I have a strong desire to be published and everyone knows how difficult that is so I just persist through all the rejected poems and manuscripts. Writer’s block? I don’t have that problem. I have to slow myself down and say, wait, do a bit more research, think about this book, then begin. I have noticed, as I write more prose, my poetry output has diminished. But the poems I do write are better, I think, so that evens out.”

Louise Carson is the author of the Maples Mysteries with The Cat Among Us and The Cat Vanishes. The third one – The Cat Between – is out October 2019. She is submitting the manuscript of the fourth one – The Cat Possessed – this fall, hopefully for publication in 2020; and she has been writing the fifth one, tentatively titled A Clutter of Cats. She enjoys working on the series very much and has been at Clio Book Store a few times for signings, including one coming up on Saturday, October 26 from 10 to 12. You can also catch Carson at numerous readings such as Twigs and Leaves, The Lawn Chair Soirées, Pincourt Poetry and so on. She will be part of a mystery writer panel at Beaconsfield library on September 28th from 1 to 3:30.

The publication of Third Circle, Book Three of The Chronicles of Deasil Widdy, possibly in 2020, should mark the end of the Deasil series; In Which and Measured with Broken Rules Press, a small press from Ste- Anne de Bellevue.

“But if a publisher liked the books and wanted another trilogy, I could write more about Deasil. Scottish history, folklore and geography are endlessly inspiring. Make me an offer!” says Carson.

She would love to publish another poetry collection. Her first one, A Clearing, was published in 2015. She is in contact with a publisher who may be interested. It would be a project that Louise could tackle during the winter months after launching the two latest books The Cat Between and Measured.

Born in Montreal and raised in Hudson, Quebec, Louise Carson studied music in Montreal and Toronto, played jazz piano and sang in the chorus of the Canadian Opera Company. At the age of ten, she published her own newspaper: two editions of The Groundhog Gazette, which she distributed to her family. Carson was destined to be a writer. When asked about advice for young authors, she says:

“I liked creative writing in elementary and high school and wrote poetry. But I had this other thing – music – that I decided to do. So I came to writing seriously in mid-life. I guess I would say that any life experience or training which requires discipline is going to help you when you decide to write, or, as happened to me, when writing pounces on you.”

Her poems have appeared and continue to appear in literary magazines, chapbooks and anthologies from coast to coast, including The Best Canadian Poetry 2013. She has been shortlisted in FreeFall magazine’s annual contest three times and won a Manitoba Magazine Award. She is regularly featured in public forums, podcasts, Hudson’s Storyfest (2015), as well as various readings and open mics from Montreal to Toronto, Saskatoon to Kingston and New York City. A former music teacher with a Bachelors of Fine Arts in Music from Concordia University, Louise now dedicates all of her time to writing.

You can catch some of her readings on:

In Which, Book One of The Chronicles of Deasil Widdy, Broken Rules Press, 2018

The Cat Among Us, fiction, Signature, October 2017