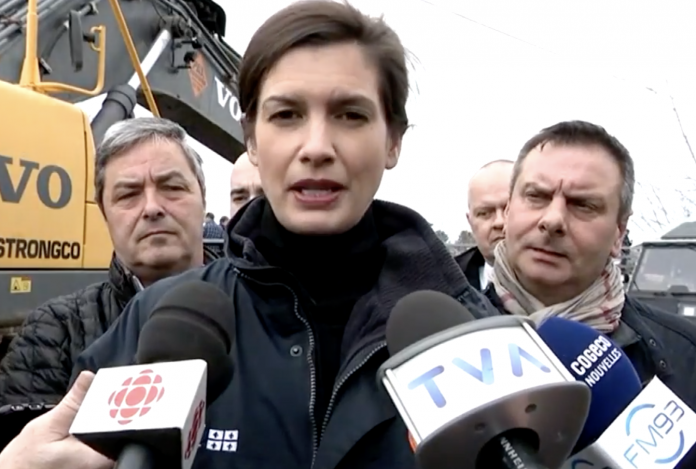 Public Safety Minister Geneviève Guilbault indicated in a press conference on Saturday, April 20, that MNA François Bonnardel will be offering technical support to municipalities, even the smallest, to protect the integrity of road infrastructure and prevent accidents.

According to police, a woman in her 70s has died after driving her car into a massive sinkhole caused by flooding in western Quebec. The accident left her sedan upside down in a swollen stream after rising river levels swept away part of the road in the Outaouais region overnight.

Sgt. Martin Fournel of the MRC des Collines police said witnesses parked near the washout tried unsuccessfully to warn the driver as she approached.

“I want to offer all the condolences [on behalf of] the government, it is tragic, all our thoughts are for the family, the investigation falls under the responsibility of the Sûreté du Québec. We should know more in the next few hours, “said Ms. Guilbault.

The minister also invited municipalities affected by the floods to make known “their specific needs in terms of evaluation and protection of road network infrastructure.”

“We invite people to be extremely vigilant and cautious, we know what is coming in the next few hours for many, follow the instructions of the local authorities,” said Ms. Guilbault who called on the Canadian Armed Forces for help.

“The regional liaison officers of the [Canadian Armed Forces] are currently deployed in five of our regional branches of civil security and fire safety, in the Outaouais, Montreal-Laval-Lanaudière-Laurentides, Montérégie-Estrie, Mauricie and in the Center-du-Québec and Quebec-Chaudière-Appalaches. “