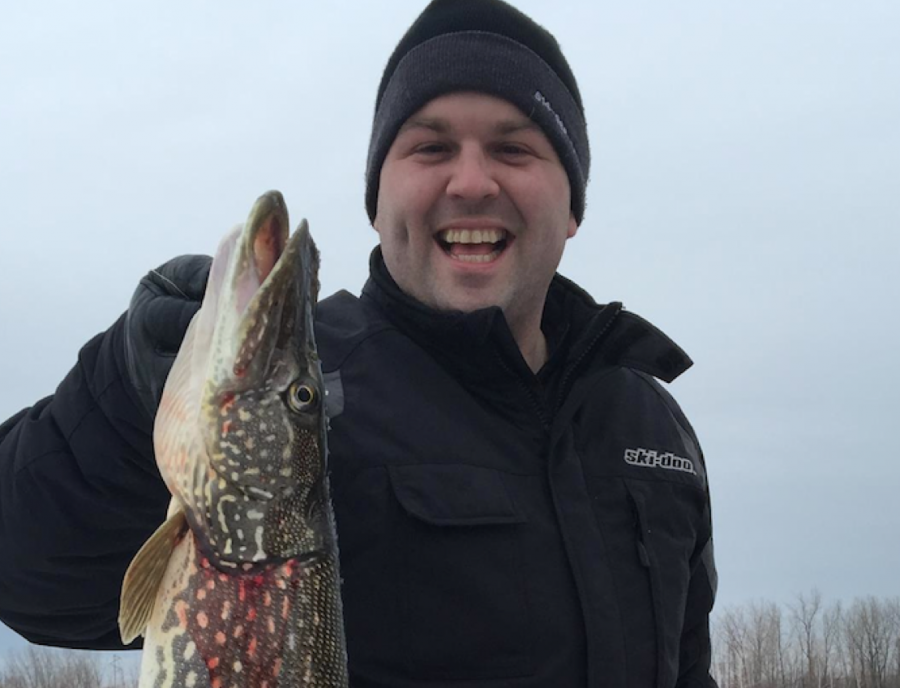 Action Jeunesse de l’Ouest-de-l’Île (AJOI) CEO, Ben Langevin caught a 10 pound pike off the coast of Valley field while ice fishing last weekend.  Fish such as pike, carp and sturgeon are plenty full in the waters of lake St. Louis and the St. Lawrence river.

“Ice fishing is an incredible experience,” Langevin told The Suburban, “It is an activity where the youth join with elders. Where we can talk about our generation and practice the art of connecting with other generations in an informal ambience.”

According to Langevin he and his friends have caught many fish in past years.  Some sturgeons weighing in at up to 30 pounds.

“Sturgeons are massive and look like sharks,” he enthused.

According to “Freshwater Phil” (Phil Lumbroso), a local montreal fisherman
and blogger, the sturgeon is the largest of our freshwater fish and has the
longest life expectancy of more than 100 years. The average catch in the
Montreal area is about 2 to 4  feet and weighs from 20 and 50 lbs.

“Sturgeon are best fished with worms or dead minnows, either from shore or
from a boat,” he stated in an interview with The Suburban, “Fishing for
sturgeon requires more attention than carp or catfish, as you need to feel
the take and set the hook, as opposed to letting them run like you may with
a carp or catfish.”

The sturgeon fish has a distinct caudal fin that helps to propel and
maneuver the fish.  It is most often used to generate swimming power and to
assist in braking, turning, or stopping similar to that of a shark.

“The body of the sturgeon is hard to hold because they have a muscle on
both sides, like a shark,” Lumbroso explained,”they actually look like a
shark from the back when you catch them.