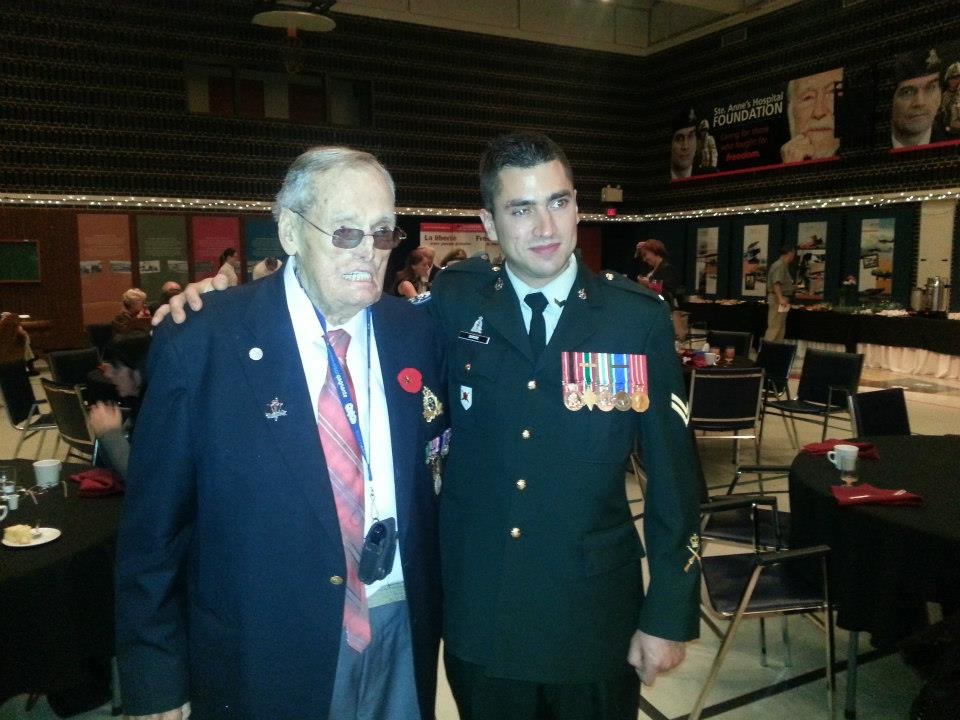 After a close brush with death in Afghanistan, Cpl. Franck Dupéré has chosen to channel his life journey right into a career as a motivational speaker. His experience as a soldier in Afghanistan has led him to speak to high school students, veterans and sports teams about his drive to accept what life has dealt him and grow from it.

Cpl. Dupéré joined the Canadian Forces when he was 16 years old. He signed up with Laval’s 4th Battalion, Royal 22nd Regiment. After completing his basic training course he qualified to operate machine guns and communication devices. With a tour in ex-Yugoslavia in 2001 under his belt, he accepted a mission to Afghanistan in 2008.

In 2011, he experienced the nightmare that civilians can only imagine. A suicide bomber strapped with over 150 pounds of explosives detonated the device within a few metres of Cpl. Dupéré.

Thrown like a puppet by the blast, he was certain he was doomed when he looked down and saw the slice in his throat. Fortunately for him, he was right next to an experienced medic who took control of the situation and performed a tracheotomy right there on the front lines—with no anesthetic. The emergency intervention saved Cpl. Dupéré’s life.
Days later, Cpl. Dupéré woke up in a trauma treatment hospital in Germany. The doctor there explained his injuries to him and what had happened.

“I had lost several days of my life—from the battlefield to the hospital in Germany,” he explained to The Suburban in an interview, ” I thought to myself, I have lost the sight in one eye, I can still see. I have lost the dexterity in my left hand, not in my dominant hand. I speak weirdly, but can still I speak. I can sit here and cry—or be thankful that I am not dead.”

After more than 18 surgeries with another still to go, Cpl. Dupéré has courageously accepted the path that life has given him. He now shares his inspirational attitude and generous spirit by giving motivational speeches to anyone who needs him.

Several times a month, Dupéré visits the veterans at the St. Anne’s vet hospital. He claims he feels connected to the vets and likes to spend time with them. His time spent at the hospital benefits the vets as well as himself.

“Many times, veterans will call me instead of a social worker because they know that I won’t judge them,” he explained. ”Sometimes these guys come back without a scratch on them but are hitting rock bottom.”

“I did not hit rock bottom mentally but, physically, I know what it’s like to have to relearn how to walk and how to talk. I live with scars. I can help people who are in despair.”

Last year Cpl. Dupéré participated in CBC’s March to the Top, a compelling and emotional documentary highlighting the challenges 12 wounded Canadian vets faced as they struggled to the 20,305 ft. high summit of Island Peak, a mountain near Everest in the Himalayas.

He is also honourary chairman of the Mingo-McEwen fund, a West Island based foundation that has raised more than $750,000 during the past 14 years for local charities.

May 9, the first ever National Day of Honour commemorating Afghanistan Veterans marked the end of this important Canadian military mission that stretched over 14 years.

Cpl. Dupéré was in Ottawa on the special day participating in a ceremony at the Canadian War Museum.