The sad wreck of the Kathryn Spirit cargo ship, abandoned in the St. Lawrence River near Beauharnois in 2011, caught fire in April of this year.

Beauharnois firefighters, with help from colleagues from surrounding municipalities, took several hours to control the blaze, which emitted thick plumes of smoke.  The fire broke out as the last chapter in the long saga of the Kathryn Spirit was coming to an end. After years of immobility, the federal government awarded an $11-million contract last year to a conglomeration of businesses to dismantle the ship. Ironically, one of the companies picked was the same one that abandoned the wreck in 2011.

The Honourable Marc Garneau, Minister of Transport, today, October 12,  announced that the Government of Canada has delivered on its commitment to permanently remove the abandoned and derelict vessel Kathryn Spirit from the shores of Beauharnois, Quebec. 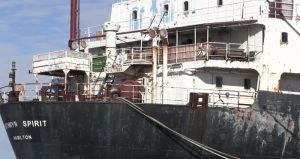 According to the Government of Canada, removal of this vessel was necessary to protect the coast of Lac St-Louis and the quality of the water, and this in the interest of the community and all Canadians for today’s use and for future generations.  Abandoned, derelict and wrecked vessels pose to safe navigation, the marine environment, public health and local economies.

“Our environment and rivers are a source of pride for Canadians from coast, to coast, to coast,” stated MP for Vaudreuil-Soulanges, Peter Schiefke. “That is why our government committed to doing everything to protect them—starting with the prompt and meticulous dismantling of the Katheryn Spirit on Lac St-Louis. Since 2015, our government has worked extensively with experts and our Canadian Coast Guard to find the safest, most effective, and ecological way to remove this shipwreck from the waters. I am incredibly proud to know that our efforts were a complete success and that the ship has now been fully removed. I want to thank all those who helped to carry out this painstaking task and who, coincidentally, helped preserve and protect our precious environment for future generations to enjoy.”

Built in 1967, the Kathryn Spirit has not had an owner since 2015, at which point the federal government took control. The ship, which had been used as a cargo ship in the past, had been towed to Beauharnois in 2011 by the Groupe St-Pierre, which wanted to dismantle it in the St. Lawrence River to then sell the scrap metal.

The dismantling of the ship is to be done under the constant supervision of the Coast Guard due to potential hazardous materials in the structure of the ship itself.. The ship is to be completely dismantled and its parts taken away by September. The site is expected to be returned to its original state by October 2019. 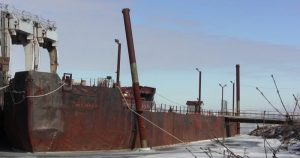