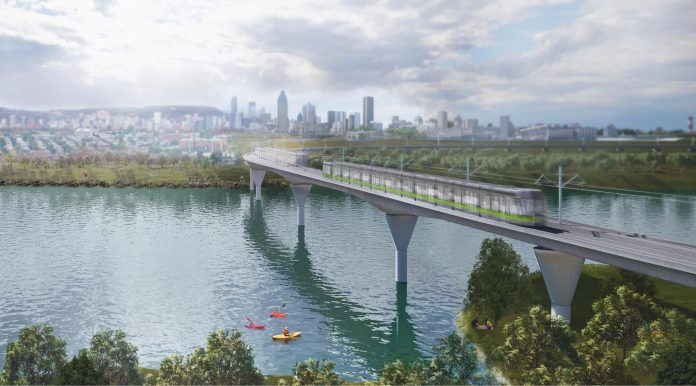 More than 200,000 people will have direct access to the Dorval intermodal station
if the Réseau express métropolitain (REM) tunnel is extended by a mere 700 metres to create a link with the railway stations and bus terminal adjacent to the Montreal-Trudeau Airport.

An independent study conducted at the request of the City of Dorval concluded that it is “essential to build this short extension for the benefit of the REM, the airport, the residents of Dorval and Lachine, VIA Rail, Montreal Transit (STM) and exo passengers, and for the metropolitan population in general.”

The REM would see an additional 3,600 people pass through this station every day, and users would be able to shorten their travel time by 12 to 58 minutes.

“All stakeholders are in favour of this undertaking, including the directors of Aéroports de Montréal, VIA Rail, CDPQ Infra, the municipalities and adjacent Montreal boroughs, as well as the surrounding population. This is a planning oversight that must be addressed. We have here an opportunity to act before the work begins!” stated Dorval Mayor Edgar Rouleau.

The business community and the population, in general, have long been asking for a direct link from the railway stations and Montreal Transit terminal to the airport and downtown. Transport Canada policies now encourage the planning of intermodal stations to improve road traffic and to promote active and public transportation and sustainable development. The Government of Quebec is also in favour of such initiatives.

A real transit hub
Just over half a kilometre in length, this extension would make it possible to create a true public transit hub providing direct access to the REM and to the Montreal subway network for the 100,000 people who live near the airport – access that is not possible with the single REM station in the airport terminal.

The new intermodal station, along with the VIA Rail and Exo train stations and adjacent Montreal Transit terminal, would provide direct access to the REM for the 40,000 public transit users who pass through this area on a daily basis – not to mention the airport’s 55,000 passengers and its 30,000 employees, and the 150,000 drivers who use the Dorval Circle every day.

“This connection with the stations has always been part of the plan. However, routing the REM to the north rather than the south will prevent passengers from accessing these stations unless this short extension is built. All airports around the world now focus on providing transport interconnections for more efficient movement of people. We need to do the same in Montreal,” said Mayor Rouleau.

He also pointed out that failure to build this extension as part of the REM project would make absolutely no sense.

“Ending the REM under the airport makes it impossible to create an interconnected public transit and airport network and prevents access for people who live near the REM station, while construction of the 700-metre extension would achieve precisely the opposite result. A real travel hub would be created at the airport, as is the case at most large-city airports where one can easily transfer from airplanes to trains, buses or subways,” said Mayor Rouleau in conclusion.