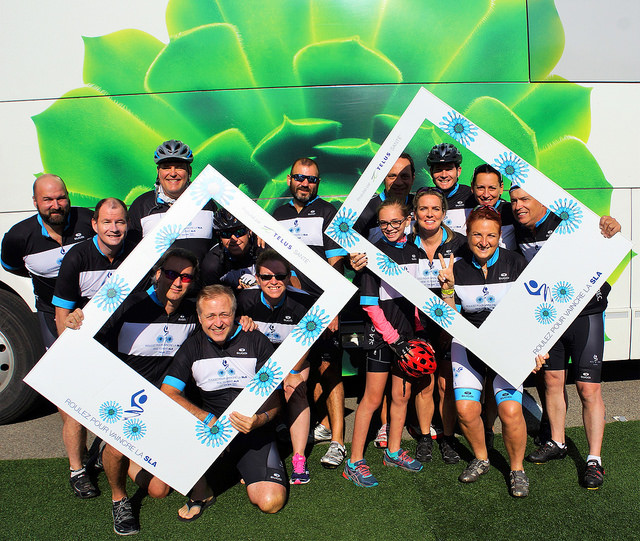 From August 25th to 27th, 200 cyclists and volunteers gathered at Château Vaudreuil to celebrate the 10th edition of the Ride to Fight ALS powered by TELUS Health, a cycling event benefitting the Amyotrophic Lateral Sclerosis (ALS) Society of Quebec. Participants rode between 70km and 300km over 1, 2 or 3 days in the Vaudreuil-Soulanges region and took part in a “Magical Evening” benefit dinner. $400,000 has been raised to date to support families touched by ALS in Quebec with personalized programs and services. Funds will also support pan-canadian research.

Since 2008, the Ride to Fight ALS has been the Society’s flagship event, with cyclists of all backgrounds participating and raising $2 million to this day. The ALS Society of Quebec would like to thank the event’s key sponsor, TELUS Health, and Château Vaudreuil for its generous hospitality.

More commonly known as Lou Gehrig’s disease, Amyotrophic Lateral Sclerosis (ALS) is a devastating neurodegenerative disease that attacks the body’s nerve cells, and is usually fatal within two to five years. As motor neurons are destroyed, persons with ALS lose their ability to walk, speak, swallow, and breathe. They become prisoners within their own bodies, without losing their intellectual faculties. The cause is unknown and there is no effective treatment. The ALS Society of Quebec is a non-profit community organization that provides programs and services to families touched by ALS throughout each stage of the disease. Promoting, subsidizing, and advancing research on the causes, treatment, and cure for ALS are also integral parts of the Society’s mission, which survives on donations and proceeds from various fundraising events. For more information please visit: als-quebec.ca.